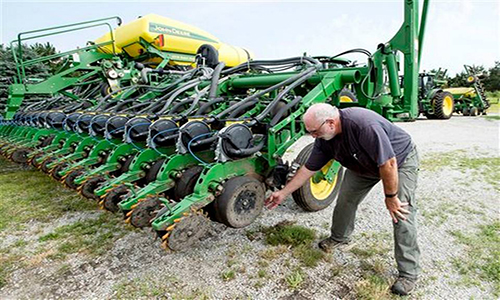 They have air conditioning, guidance systems, satellite radio and more sensors than he can shake a corn cob at, all kept running by computer systems and software.

But there’s one thing the Waverly farmer doesn’t have: the right to fix his John Deere 8235 R if it goes on the fritz.

Gone are the days when farmers could be their own mechanics. Just taking a peek under the metaphorical hood of the computers that run the big tractor could put Minchow in violation of the federal Digital Millennium Copyright Act.

It’s the same for digital products from cell phones to printers to concrete crushers that rely on computer programs to run.

The Lincoln Journal Star (http://bit.ly/29ojbhB) reports that Nebraska is one of four states to consider legislation that would require manufacturers to make diagnostic, service and technical information available to farmers and independent repair technicians. The others are Massachusetts, Minnesota and New York.

While the Nebraska Fair Repair Bill (LB1072) failed to gain traction before senators adjourned this spring, the issue is far from dead. It has been referred to the Agriculture Committee for study over the summer, and advocates are pushing for the bill to be reintroduced during the next session.

Now, the makers of off-road and farm equipment and many consumer electronics require their products to be repaired by certified technicians.

That means if Minchow’s tractor stops working he has no choice but to call the dealer. He can’t check the system codes himself to decide whether it’s an easy fix like changing a filter or something more complicated. And that grinds the Waverly-area farmer’s gears.

“I want it to be my call. I don’t want to have to make two trips to the service department – one to diagnose it and one to fix it,” said Minchow, who has been farming north of Waverly for more than 40 years.

And as dealerships have closed or consolidated, he said, technicians have gotten further away and service bills more expensive.

John Deere, in a 2014 comment to the U.S. Copyright Office, said the people who buy its tractors don’t own the software that makes them run. Instead, each has an “implied license for the life of the vehicle to operate the vehicle.”

In some cases, the company said, the software could be subject to third-party restrictions and accessing it could violate copyright, trade secret or contractual rights.

But farmers work when they can, and every hour matters when storms, frost, and mud leave them with few suitable days. A malfunctioning combine can bring the fall harvest to a standstill.

Waiting for a dealer to diagnose and fix a problem could mean hours, days or weeks lost.

Proponents of Nebraska’s Fair Repair Bill say it would let farmers work on their own equipment and allow independent mechanics to help get machines running quicker.

The Nebraska Farm Bureau, the state’s largest agriculture advocacy group, has not taken a stance on the issue but its members are talking about it, said Jordan Dux, the state Farm Bureau’s director of national affairs.

“For the time being, we remain neutral on it but that very well might change as we work through our policy development process,” he said during a recent web forum.

Some Farm Bureau members, Dux said, are concerned about taking business away from dealerships at a time when the ag economy has slowed and few farmers are buying new machinery.

Another concern, Dux said, centers on what farmers should do if they buy equipment and find the previous owner made changes to the software they don’t like.

Kyle Wiens, a software engineer and leading figure in the national Right to Repair movement, said in the same web seminar that new owners of used equipment would have what they need to restore factory defaults if manufacturers provided diagnostic tools and software.

John Hansen, president of the state’s second largest agricultural advocacy organization, the Nebraska Farmers Union, supports the Right to Repair efforts saying farmers should have the same option to get their tractor fixed by an independent mechanic as they do when they need to get their truck fixed.

“This is a fairness issue. Folks in agriculture shouldn’t be singled out and treated differently than the automotive customers or truck customers,” Hansen said in the web forum.

“Competition is what makes our system of economics better. When you take competition out of the equation there is almost always a reduction in choice and quality and an increase in cost to the consumer.”