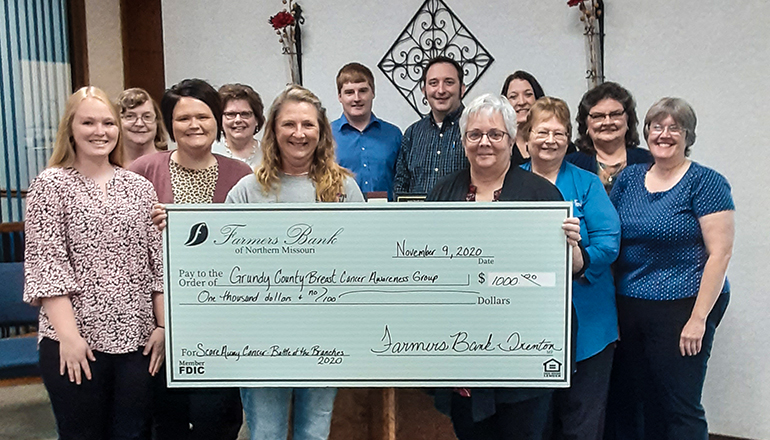 Farmers Bank of Northern Missouri has announced that the Centerville branch is the winner of the Farmers Bank of Northern Missouri Scare Away Cancer – Battle of the Branches scarecrow contest.  Centerville earned the most points based on the dollar amount of the donations collected plus the number of likes, comments, and shares on the Facebook post featuring their scarecrow display.

The Scare Away Cancer – Battle of the Branches Scarecrow contest gave the employees of each Farmers Bank branch the opportunity to decorate their locations with pink fall décor and hold fundraisers with all proceeds going to a local organization aiding those battling cancer.

A grand total of $9,241.42 was raised by the Farmers Bank of Northern Missouri branches with each branch to present the donations to a local organization.

Farmers Bank Marketing Director Cindy Roy stated, “On the behalf of Farmers Bank, we would like to say thank you to all those who made donations and liked the Facebook posts featuring the displays at each branch. The support from the local communities combined with the efforts of all the Farmers Bank employees made the Scare Away Cancer – Battle of the Branches Scarecrow contest a huge success.”