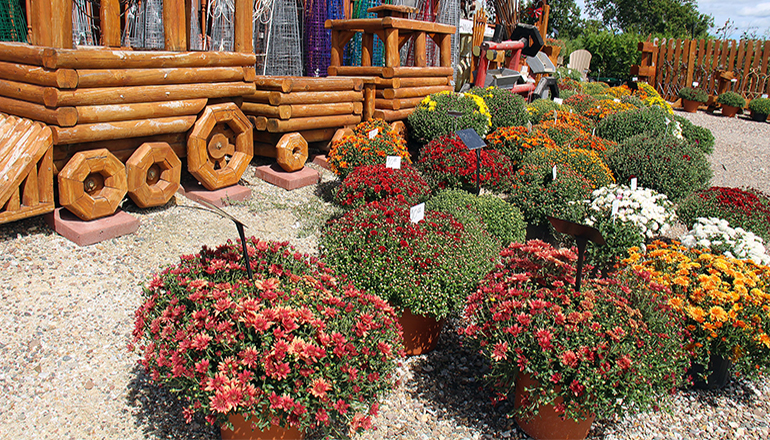 “Mum’s the word,” but fall color shouts at Dutch Garden Nursery of Edina, a Knox County community of about 1,200 people.

James Burkholder of Dutch Garden Nursery raises 2,800 mums each year. Most go to C&R Markets’ 11 stores in northeastern and central Missouri. He also sells at his nursery and at a second retail location, Country View Store, near Memphis, Mo.

Mums begin as small plugs grown in greenhouses in May. The mums receive water and fungicide through drip lines and “lots of fertilizer,” Burkholder says. He quits fertilizing when mums begin showing color.

Burkholder staggers plantings so that the first mums go out the door by the end of August. Wholesale distribution begins at the end of September and continues through fall.

While 2019 was a challenging summer for row crops and gardening, it was an “awesome summer” for mums, says Burkholder. Frequent rains caused tomato plant sales to plummet. Burkholder thinks sales will skyrocket in 2020 as gardeners clamor to replenish canned goods and enjoy fresh tomatoes.

The Burkholders also open their greenhouses and store for MU Extension Master Gardener tours. “Master Gardeners spend time socializing and admiring and purchasing garden plants, vegetables, seeds, and gift items,” Schutter says. The family-run business in a rural setting appeals to visitors from all over northeastern Missouri, she says.

Burkholder has expanded his greenhouse operations methodically since 2005. He began by adding perennials, ornamental trees and shrubs, fruit trees, seeds, decorative gift items, and landscaping materials such as mulch and soil. Burkholder now runs eight greenhouses. His sons custom-make a large assortment of outdoor furniture such as picnic tables and glider rockers.

Burkholder says his success is based on attention to detail for hardiness zones and knowing what local gardeners like. Petunias remain the spring favorite, followed by marigolds and impatiens.

He sees the nursery as an opportunity for his six sons and one newborn daughter. The boys help in the nursery and on the Angus cattle and row crop farm. They also make birdhouses, planters and decorative items to sell at the nursery or store.