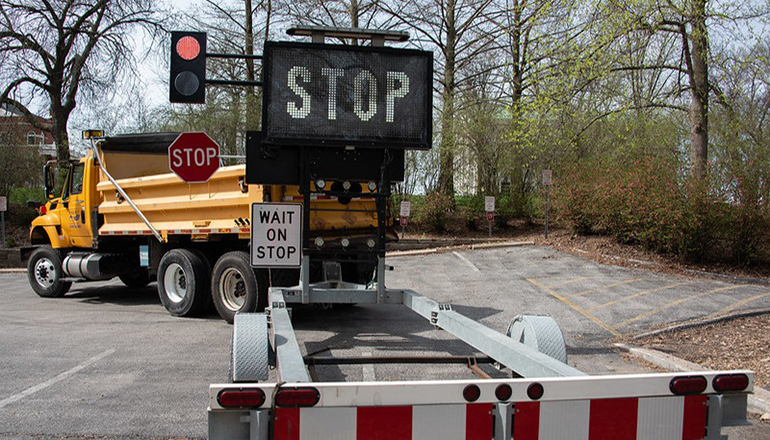 “I don’t remember taking the hit…”

Retired MoDOT employee Mark Fresen only recalls the moments before a truck side-swiped the truck-mounted attenuator—or TMA—he was driving in a St. Louis work zone, crushing in the cab and pinning him inside. But it was an experience he’ll likely never forget. “When I woke up, I know someone was saying, ‘Well, you’re in the hospital,’” Fresen said. “And if I hadn’t been where I was, it could’ve killed about five guys.”

Fresen spent more than a year recovering in the hospital, and more than 200 days of it in intensive care with a broken pelvis and severe internal damage, and he’s not alone in his experience. Last year, there were 39 TMA crashes in Missouri. And with 18 so far in 2020, the state’s on pace to see more of these work zone crashes than ever.

But there’s time to turn it around. With the start of a busy construction season and National Work Zone Awareness Week coming up April 20-24, MoDOT reminds motorists to slow down and avoid distractions when driving through work zones.

“Lives are at stake. Last year, 18 people were killed in Missouri work zone crashes,” said State Highway Safety and Traffic Engineer Nicole Hood. “When you make the decision to drive recklessly through a work zone, you’re unnecessarily putting yourself and our crews at risk.”

That’s why MoDOT is urging drivers to take two simple and impactful actions to help protect themselves and those working along the highways: buckle up and put the phone down. Distracted driving remains a leading contributor to work zone crashes. And the best defense in a work zone crash, or any crash, is a seat belt.  In 2019, 64 percent of vehicle occupant fatalities were not wearing a seat belt.

“Your actions behind the wheel can prevent a needless tragedy,” said Hood. “The life you save by buckling up and paying attention may be your own.”

The department is also urging drivers to pay attention to their speed. Traffic volumes across the country are down approximately 40% as a result of the COVID-19 pandemic, but MoDOT officials and their law enforcement partners are seeing an increase in speeding on Missouri highways.

MoDOT also advises motorists to observe warning signs and merge before reaching lane closures. Be aware of changing traffic conditions. Traffic could slow or stop unexpectedly, traffic lanes can merge, or equipment and workers can enter the roadway. Be aware and be prepared to slow down.

And MoDOT is doing its part to make work zones a safer place for workers like Fresen. The department is purchasing TMA automated flagger assistance devices, which remove an employee from a potentially dangerous situation, alerting drivers with a message of ‘stop’ or ‘slow’ in work zones with lane reductions.

MoDOT is also using predictive analytics in its I-270 North design-build project in St. Louis, making it the first DOT in the country to use the technology specifically in a work zone. Predictive analytics uses real-time and historical data to predict certain occurrences, such as the likelihood of a crash in a certain location at a certain time.

To help make your travel safer, visit MoDOT’s Traveler Information map and find out what work zones you’ll encounter before you go. And remember to do your part to save lives in those work zones: buckle up, slow down and pay attention.

“There was one day, I heard on the 10 o’clock news that there were no reported crashes that day,” Fresen said. “Wouldn’t that be something? If that could happen every day?”