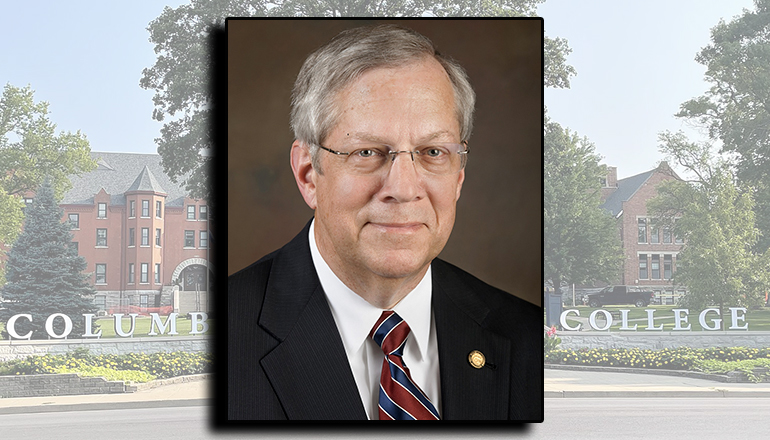 The Columbia College Board of Trustees unanimously named Dr. David Russell the college’s 18th president on Friday afternoon. Russell has served as interim president since January 2021, and the promotion to president is effective October 1, 2021. Russell’s appointment will add three years to his current contract, which will now run through 2025.

“This decision is critically important for our college community, and the board firmly believes that Dr. Russell is the right person at the right time to lead our institution,” said Board of Trustees Chair Rev. Dr. Brad Stagg. “In January 2021, the Board announced that a national search would be conducted to find the college’s next president. However, over the course of the last nine months, it has become apparent that Dr. Russell is the ideal choice. His extensive experience in higher education, the military, steady and decisive leadership style, and strong relationships in the Columbia community will be key for the institution’s future success.”

During his time as interim president, Russell has implemented aggressive strategies to keep the college moving forward. Earlier this spring, he formed a Strategic Planning Committee comprised of college community members and alumni to map out the future of the college for the next five years. Several trustees also participated in the effort.

“Columbia College is truly a special place, and it is an honor to continue working with great faculty and staff to support CC students around the country,” said Russell. “I would like to thank Chair Stagg and the board for their unwavering support and confidence.

“The college community has embraced my wife, Lee, and me with open arms during the last nine months and we look forward to becoming even more engaged in the college’s culture,” Russell continued. “CC possesses the elements needed to achieve great success, and with unity and attention to the right initiatives, we will continue to adapt to the evolving needs of our students.”

The college quickly exploited its long-time presence in online education to make more courses available to students during the height of the pandemic. Russell said the college had to learn to co-exist with COVID and led the charge to ensure the safe return of students to the college’s 37 locations in 14 states in August.

On Thursday, Russell announced during his State of the College address that the institution will hire its first Director of Diversity, Equity, and Inclusion this fall.

“From his first day as interim president, Dr. Russell has worked to create a welcoming, inclusive atmosphere and build strong relationships with our faculty, staff, and students,” said Provost and Senior Vice President Dr. Piyusha Singh. “He is an insightful leader who has already taken strategic action to strengthen Columbia College. I have no doubt that Columbia College will thrive under his leadership, and I look forward to working with him.”

“Dr. Russell has been very receptive to different ideas from members of our faculty and we appreciate his continued support,” said Dr. Joyce Gentry, professor of nursing and president of the Columbia College Faculty Association. “His passion for education and commitment to our students are just a few of the many reasons he is the ideal choice to lead Columbia College.”

As commissioner, he was a member of the Governor’s cabinet and oversaw a statewide higher education system that served more than 400,000 students. He was named commissioner emeritus upon his retirement in 2016. His research area of interest is educational leadership and policy analysis. He most recently served a four-year term on the Columbia College Board of Trustees, during which he also served as its chair.

Before entering higher education, Dr. Russell completed a 22-year army career in infantry, personnel management, and public affairs assignments around the globe, retiring with the rank of lieutenant colonel. His personal military decorations include the Purple Heart, the Bronze Star, and the Legion of Merit.