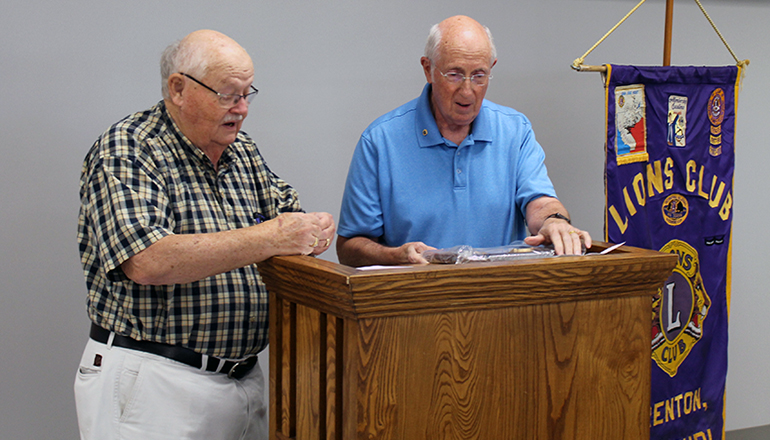 The Trenton Lions Club held a surprise ceremony to honor a long-time member for his service.

Doctor John Holcomb of Trenton was presented with the “Melvin Jones Fellowship Award,“ the highest individual award for a Lions Club member. Jones was the founder of Lions Clubs more than 100 years ago, in 1917.

Doctor Holcomb was presented with a plaque and a lapel pin in recognition of outstanding service to the Lions Club, Lions International, and the community. Holcomb was recognized for his 49 years of membership with Trenton Lions, involvement with the Trenton R-9 School District and the Trenton High School Alumni Association, North Central Missouri College, Wesley United Methodist Church, and has donated through the years more than 20 gallons of blood at bloodmobiles held by the community blood center.

The emcee for the presentation, Jim Cox, noted the motto of the Lions Club is “We Serve.” Cox announced the fellowship was made possible through the generosity of Trenton club members, who collectively donated $1,000 to secure the honor from Lions Club International Foundation.

Doctor Holcomb expressed his surprise and thanks to the club and guests for the individual honor. Adding to the surprise for him was attendance at the luncheon by his brother Jim Holcomb and his wife Mary and his sister Judy Cox and husband, Garry Cox.

Holcomb recalled he and his brother Jim were inducted into Trenton Lions in September 1972 and were sponsored by their father, Doctor James Holcomb. Jim Cox, the only other living Melvin Jones Fellow at Trenton, stated the Lions International honor for Holcomb was long overdue.