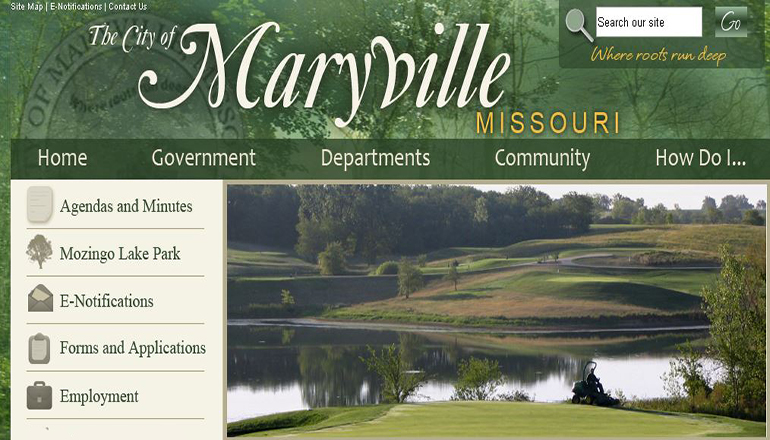 Tim Garrison, United States Attorney for the Western District of Missouri, announced that Detective Sgt. Ryan Glidden of the Maryville Department of Public Safety has received the 2018 Enoch B. Morelock Award.

The Enoch B. Morelock Award is an annual recognition of outstanding moral character, service to law enforcement and service to the community. Glidden was honored on Thursday, Aug. 16, 2018, during the 16th Annual LECC Training Seminar in Springfield, Mo. The prestigious law enforcement award, presented annually by the U.S. Attorney’s Office Law Enforcement Coordinating Committee, is named in honor of Sullivan County Sheriff Enoch B. Morelock, who was the first recorded line of duty death in the Western District of Missouri on Dec. 19, 1847.

Glidden has 21 years of law experience, including 13 years with the Maryville Department of Public Safety.

Following an event earlier in his career, Glidden recognized the need for equipment and training so law enforcement officers could assist victims of gunshot wounds and severe trauma to stop bleeding. He wanted to equip every officer in his agency with a “go-bag” trauma kit. Glidden collaborated with a local medic to conduct the training and began the ambitious project of raising money to pay for the kits, as his agency could not afford to purchase them. Through hard work and his leadership, $24,000 was raised to fully fund the project for his agency.

Realizing that the local sheriff’s office faced the same financial restraints as his own agency, Glidden directed his attention to seeking funds and assisted in raising nearly $18,000 to fully equip that agency with trauma kits.

Not done giving yet, Glidden realized that the regional dive team that assists agencies in multiple states needed assistance in securing additional equipment. He set out to raise over $21,000 to purchase a much-needed rescue boat with a motor capable of transporting a six-person dive crew as well as protective equipment. This equipment provides a greater capability of providing the necessary lifesaving operations, which would not have been possible without this funding.

In light of the increase in school shootings, Glidden reached out to public and private schools, not only in his city but across the entire county, inquiring if trauma kits would be of value. One administrator asked him the cost for these kits and he responded with his own question: “What would be the cost if we needed them and didn’t have them?”  With overwhelming support from parents, teachers, administrators and the general public, Glidden began raising funds and secured 450 trauma kits, one for each classroom in the county, at a cost of more than $28,000. He also organized in-service training with a trained paramedic to provide hands-on training with staff in each school.

Glidden was nominated by two different individuals from two different law enforcement agencies. Among the nominations and 10 letters of support for Glidden, it was written, “When our program has a need, Ryan is always one of the first people to step up when asked. He leads by example. His kindness to others and calm nature make him an excellent mentor, friend and law enforcement officer. Beyond what he brings to our organization, he is an endearing individual with an obvious passion for our community and a drive to help others.”

Sullivan County Sheriff Enoch B. Morelock was the first recorded line of duty death in the Western District of Missouri on Dec. 19, 1847. He was appointed the first sheriff of Sullivan County, Mo., in 1845. He was in office a little over two years, but he was known to be an honorable, hardworking man intent on protecting the residents of his community. Sheriff Morelock was shot and killed during a court-ordered sale of the accused=s property. The accused killer, Patrick McIntry, was charged with 1st Degree Murder but was later acquitted. Within a year Mr. McIntry was found shot to death on the banks of a local river.

The annual Enoch B. Morelock Award recognizes individuals with outstanding moral character, service to law enforcement and to the community outside of law enforcement. Recipients may include officers from local police departments, sheriffs= offices, state agencies, or federal agencies as well as investigators from prosecutors= offices.