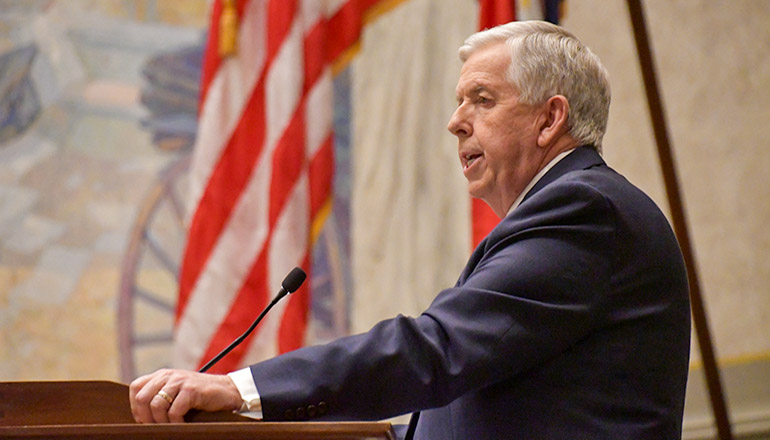 (Missouri Independent) – Missouri will enter the new budget year with a record budget surplus and no restrictions on appropriations.

The final numbers aren’t in, but by Tuesday, general revenue exceeded projections made in January by $972 million, adding to the $1.1 billion surplus Parson projected at the beginning of the year.

And while he isn’t holding back any spending, Parson vetoed $115 million in spending from 26 appropriations, including $50 million to insulate hospitals from revenue losses under a new Medicaid payment system and $302,500 to hire two security officers each for the Missouri House and state Senate.

Lawmakers will review the vetoes when they meet in September.

Parson warned June 21 that he would cut $722 million from the budget, including all new spending for higher education and Medicaid providers if lawmakers did not extend the federal reimbursement allowance taxes that will supply $1.6 billion for the state’s share of the program.

Lawmakers passed a three-year extension Wednesday afternoon, and in his news release about the budget, Parson thanked them and praised the additions to the budget the action allows.

“Without their efforts, we would be announcing unprecedented budget restrictions rather than these historic investments,” Parson said. “To all those who helped get FRA across the finish line: we appreciate your work.”

The new higher education items include $20.2 million more in operating funds for four-year universities, $10 million extra for community colleges, and $2 million for the State Technical College, along with $13.2 million to allow for growth in the A+ Schools Scholarship Program and $3.9 million more for the “Bright Flight” scholarship program for high-achieving students.

“Missouri’s financial situation is vastly different from what we faced in 2020, and we applaud the General Assembly for recognizing this historic opportunity to make critical investments in the future of our state,” Parson said.

One item vetoed from every budget bill was “performance incentives for high-achieving department employees.” The $5.2 million in vetoes were made, Parson wrote in the letters describing his budget actions because the state is studying “alternative performance-based incentives.”

In many instances, Parson wrote that he was vetoing spending because he did not recommend it in his budget message. The $50 million for hospitals was designed to protect them from potential losses from a new payment method based on the way Medicare pays for outpatient services, with a set fee for each type of service.

The money “is contrary to the Medicaid reforms included as part of the Fiscal Year 2022 budget,” Parson wrote.

The extra security for the House and Senate isn’t needed, Parson wrote. It “unnecessarily duplicates services already provided by the Capitol Police.”

While he cut the incentive pay lines, Parson signed off on spending to hire and recruit new employees. There is $5.3 million for 50 additional Community Mental Health and Substance Use Disorder liaisons, $3.6 million and 53 employees to eliminate the waiting list for public defenders, and $21.5 million to recruit and retain employees in the Department of Corrections.