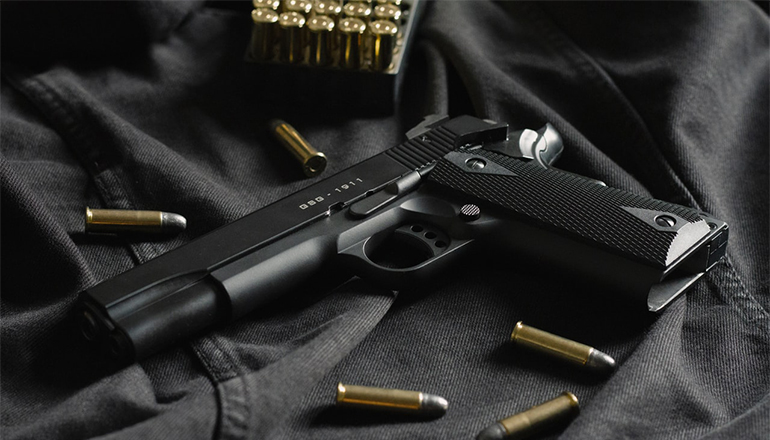 (Missouri Independent) – President Joe Biden Monday unveiled the Department of Justice’s plan to regulate untraceable firearms known as ghost guns, as well as announced his nominee to lead the Bureau of Alcohol, Tobacco, Firearms, and Explosives.

The Department of Justice’s final rule bans the business of manufacturing ghost guns, such as “buy build shoot” kits that can be bought online – without a background check – and easily assembled. Ghost guns are homemade guns that lack a serial number, making it difficult for law enforcement to trace the owner of the weapon if it’s found at a crime scene.

“This is basic common sense,” Biden said of the final rule.

The DOJ rule clarifies that those kits qualify as firearms and that the manufacturers of those kits must “become licensed and include serial numbers on the kits’ frame or receiver, and commercial sellers of these kits must become federally licensed and run background checks prior to a sale – just like they have to do with other commercially-made firearms,” the White House said in its statement.

Next to the president was a kit, the parts of the gun laid out to show how easy it was to assemble a gun. Biden picked up the incomplete gun, showing it to the press and attendees.

“It’s not hard to put together,” Biden said. “Anyone can order it in the mail … a terrorist, a domestic abuser.”

During a Monday press briefing, White House Press Secretary Jen Psaki said that the Biden administration’s goal is to always “reduce the impact of gun violence.”

Psaki said that the final rule from the DOJ about ghost guns is “supported by law enforcement and addresses what we know is a rising composition in gun crime across the country.”

The rule goes into effect later this year.

Biden also called on Congress to pass universal background checks and a ban on assault weapons and high-capacity magazines during his announcement in the Rose Garden. He was also joined by Vice President Kamala Harris and Deputy Attorney General Lisa Monaco.

Biden also said during the Rose Garden event that he had tapped Steve Dettelbach, former U.S. Attorney for the Northern District of Ohio, to lead ATF due to his experience working with federal, state, and local law enforcement dealing with domestic and religious violence and his prior work with the agency to prosecute complex cases.

“The mission of this agency isn’t partisan, it’s public safety,” Biden said, adding that Dettelbach was “exceptionally qualified” to run the agency.

“Steve’s record makes him ready on day one to lead the agency,” Biden said.

House Speaker Nancy Pelosi (D-Calif.) said in a statement that with his nomination of Dettelbach “the President has selected a highly respected former prosecutor with deep experience working to reduce community violence and crime.”

Dettelbach said he has worked with ATF and its officials over his career and has great respect for its agents. He was unanimously confirmed in 2009 to serve as U.S. Attorney for the Northern District of Ohio.

“Law enforcement is a very tough job, and no person and no agency is perfect,” he said. “But the president is right that the men and women of the ATF and the public that they protect deserve better support from us.”

Dettelbach said if he were confirmed, he would support the officials at the agency and “do everything in our power to protect the people of this nation every single day.”

This is Biden’s second nomination to ATF. He previously nominated Michigan native David Chipman, a gun violence prevention advocate who worked at the agency for 25 years. The White House withdrew his nomination due to his support for a ban on assault weapons and after it was clear not all 50 Senate Democrats would vote to confirm him to the ATF.

(Photo by Thomas Def on Unsplash)