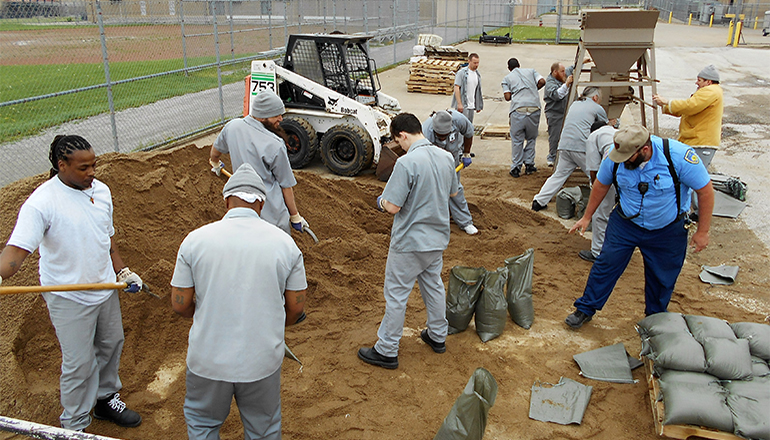 When storms and floods struck the state in the spring and summer of 2019, the Missouri Department of Corrections staff and offenders invested long workdays and hard-earned dollars to help fellow Missourians.

Supervised by staff working extra hours outside their usual shifts, more than 350 offenders from Missouri prisons contributed 1,548 workdays to flood relief, filling and placing sandbags to save towns threatened by rising floodwaters.

Working from March 15 through July 10, corrections teams helped communities including St. Joseph, Clarksville, Norborne, Brunswick, Kimmswick, Henrietta, New Franklin, and Hardin County. Some workers filled sandbags at their facilities, while the bulk labored at the flood sites, building sandbag barriers to keep the waters out. The biggest contributor was Women’s Eastern Reception, Diagnostic & Correctional Center in Vandalia, which sent 81 women to Clarksville to help with sandbagging between March 16 and June 1.

Along with physical labor, corrections groups offered financial assistance during the season.

Offenders on work release with the Missouri Department of Transportation continue to help clean up debris left behind by storms and receding floodwaters.