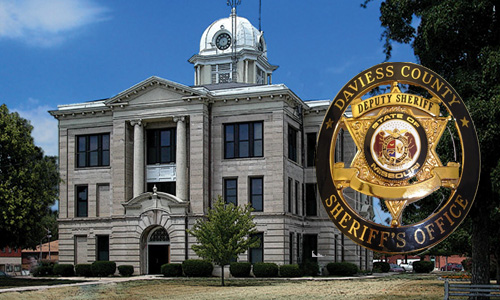 A man from San Benito, Texas has been charged in Daviess County with eight felonies.

Online court information shows 39-year-old Gregory Scott Hill’s charges include burglary in the first and second degree, stealing and stealing of $750 or more, possession of a controlled substance, unlawful possession of a firearm, possession of burglary tools, and resisting or interfering with an arrest for a felony.

The Daviess County Sheriff’s Office served a warrant for his arrest Monday with bond denied.

A probable cause statement from Sergeant Larry Adams, Junior of the Daviess County Sheriff’s Office says the Daviess County Central 911 office received a call from a Jamesport resident stating that someone was in his residence Friday morning. Adams reports the resident saw the white male subject, later identified as Hill, drive retrieve a set of keys from a sports utility vehicle parked in the resident’s garage before quickly driving away.

The probable cause statement says Hill failed to stop for emergency lights and siren, traveled west on Highway 6 toward Gallatin, and threw bags and other unknown objects out of the window of the SUV.   Items listed as being thrown out of Hill’s vehicle include three Dewalt tools valued at a total of $550. Adams says he, Sergeant Robert Mazur, and Highway Patrol Trooper Jon Lynch conducted a felony stop with the driver at the intersection of Highway 6 and Ash Street in Gallatin. Hall was reportedly ordered out of the vehicle and onto the ground, handcuffed, and searched.

The probable cause statement says Adams recovered a plastic bag containing a white crystal substance, subsequently field tested positive for methamphetamine, and a screwdriver in his front right pants pocket. Several items were discovered in the vehicle including a camouflage-colored shotgun in the passenger side of the SUV, a marijuana smoking pipe in the center console, and packages of frozen meat in the floorboard area.

Items identified as being stolen from the SUV include guns, a blue cooler, drill, and assorted clothing and purses valued at a total of $525.

Adams reports he received a call Friday night from someone who said his pickup truck had been parked at the residence in Jamesport prior to the incident, and someone had stolen the vehicle registration paperwork from the glove box.

The probable cause statement reports Hill knowingly entered an unlocked residence in Winston to commit the crime of stealing by taking multiple forms of medication in the name of the victim and assorted medical equipment without the consent of the owner.