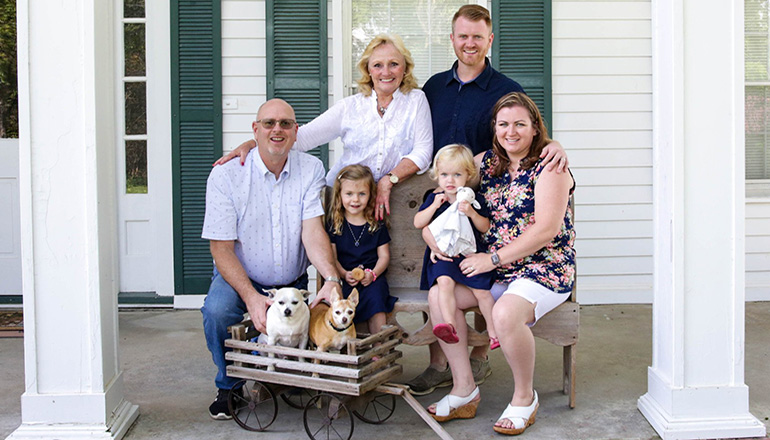 Missouri Day organizers say no other family embodies the theme of the 2019 Missouri Day Festival like Dr. Paul and Barbara Cox and Dr. Andy and Holly Cox and their family. “Missouri Day – Embracing the Past, Looking to the Future” is the theme and the Cox family certainly mirrors this theme.

Tracing back to 1924, Dr. Forrest Curtis Cox I came to Trenton from Salisbury, Missouri and began what has been a long-standing tradition of family dentistry. The original dental practice was located over the former Stein’s Clothing Store in downtown Trenton and later moved down the street to a location above Trenton Hardware.

Dr. Forrest C. Cox would be considered a “fix the problem dentist” in a day when a dentist simply solved what hurt. Moving from Salisbury was not a favored move by his family that included a brother who was also a Dentist. The railroad brought Dr. Cox to Trenton and he saw the potential for a successful dental practice.

His son, Dr. F. Curtis Cox II joined his father in 1958 and together they looked forward to serving the community. The health of the elder Dr. Cox prohibited him from practicing but a year after the father-son duo began working together and he was forced to retire from the day to day practice. But even in retirement, both men continued to work together with the elder Dr. Cox working in a home-based dental lab where he built dentures for his son and the family practice.

By this time, the family practice had relocated to 1011 Cedar Street where it remains today. The second-generation dentist began to focus more on preventive dentistry and restorative work. He became a pioneer in the field of implant techniques and practiced until his retirement in 2004.

The third generation Cox joined the practice in 1986 when Dr. Paul C. Cox returned home to join his father in the family practice. Cox Family Dentistry on Cedar Street underwent two building additions designed to accommodate a growing practice and more extensive services to their patients. Dr. Paul says that in the 1970s and ’80s, people became more preventive themselves and learned to take better care of their teeth than they used to. “Technology has played a big part in dentistry trends and the types of materials used for preventions and services is changing. Cosmetic dentistry is now very important with the ultimate goal – to make bright white teeth with big smiles!” Dr. Paul, like his father, graduated from the University of Missouri Dental School and while in College, worked in a dental lab which gave him a thorough understanding of crowns, bridges, and other dental prosthetics.

In 2013, the fourth member of the Cox legacy returned to Trenton to join his father in the family practice. Dr. Andrew P. Cox, a third-generation UMKC Dental School graduate vowed to continue the family commitment to always provide a positive impact on the health of the community and offer top of the line equipment and the latest in technology. Dr. Andy Cox has an emphasis on preventive care and reconstruction is following in his grandfather’s (Dr. Curtis Cox) shoes doing work in the field of dental implants.

The Cedar Street site of the family practice has seen many changes over the years and in 2012, the groundbreaking of the third addition to the building was completed offering additional operatories, a spacious waiting room, and an expanded front office space. In addition, new and improved equipment was added with the patient in mind for a positive experience while in the office.

Giving back to the community has always been an important creed for the entire Cox family. Dr. Paul is a former member of the Trenton R-9 School Board, the Riverside Country Club Board, the IDC Board of Directors, Trenton Baseball Association, Boy Scouts and the Quarterback Club.

Dr. Andy has followed right along serving on the Riverside Country Club Board of Directors, the Trenton Park Board, the Chamber of Commerce Board, Boy Scouts and a former member of the Ambassadors. Both men, along with their wives are active members of the First Assembly of God Church where both Dr. Paul and Dr. Andy serve on the Church Board.

Dr. Paul is married to the former Barbara Senf of Trenton who is retired from the Trenton R-9 School System, is a member of both the Sunnyview Nursing Home and Wright Memorial Hospital Foundation Board of Directors, PEO Sisterhood and she directs the Church Choir at First Assembly of God. Dr. Andy is married to the former Holly Foster of Trenton and they have two children: Ariana – age 4 and Evelyn – age 2 with a third little one on the way in March. Holly is involved in the PEO Sisterhood and First Assembly of God Girls Ministry.

The Cox family dental practice has been in existence for 95 years and is still growing. With a staff of six, they are committed to being the best that they can be. And who knows who might join the legacy of caring, compassionate providers of family dentistry in the next generation? One thing is for sure, history speaks for itself and the commitment to offer the highest level of care has and will always be foremost to the Cox family, not to mention to the opportunity to develop friendships with their patients and their families and the opportunity to restore a patient’s smile with skill, predictability, and compassion.

A proud family tradition is what the Trenton Rotary Club and the Missouri Day Steering committee sought in selecting their 2019 Grand Marshall and the Cox family is the perfect fit.