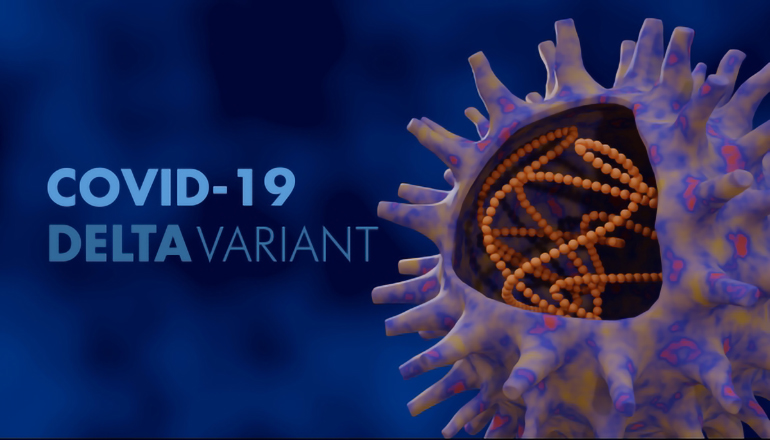 With COVID-19 cases spiking in Carter County in southeast Missouri, and many of those infections among very young children, LaRue shut down the district’s pre-kindergarten program for two weeks. He had previously directed faculty, staff, and students to wear masks as of Friday.

There were 35 active cases among students and staff and 133 in quarantine as of Tuesday morning. Attendance in elementary grades, he said, is about 66 to 68 percent.

LaRue is worried that if cases continue to increase, he will have to stop in-person instruction for other students as well.

“We are very concerned,” LaRue said in an interview Tuesday with The Independent. “That was an email I sent to my board yesterday, that if this continues…today is our third day in masks, and hopefully that has slowed down the spread and mitigated some of the spread.” 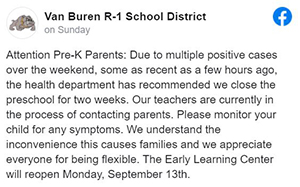 One effect of the Delta variant wave is that children are a much larger share of recent COVID-19 cases.

The highest vaccination rates are among older, more vulnerable people, resulting in case rates among that age group declining.

Meanwhile, the vaccine remains unavailable to those under 12.

Over the past six days, almost 1 in 5 of the confirmed cases in Missouri have been among children under 18. During the winter, it was fewer than 1 in 9.

Of 10,147 cases in that period where the Department of Health and Senior Services has reported age data, 1,871 have been among school-age children — and more than half that number have been children under 10.

No age data is available for the 3,014 antigen-tested cases reported in the same period. A similar share would result in about 550 more sick children.

For a second week, COVID-19 cases are forcing high schools to cancel football games. Battle High School in Columbia announced Tuesday it would not play its Friday game, the Columbia Daily Tribune reported.

Cases among people under 19 are as much as 30 percent of recent new cases from the five most populous counties of the St. Louis region, said Clay Dunagan, BJC HealthCare’s chief clinical officer and leader of the St. Louis Metropolitan Pandemic Task Force, in an interview with The Independent.

“We have just got so many districts where parents and school boards are resistant to the idea of restrictions like masks,” Dunagan said. “We are seeing transmission in schools. We are already seeing cases pop up.”

The 25 children hospitalized with COVID-19 in task force hospitals is three times higher than in earlier waves of infection, he said. There were eight children in task force ICU beds in with COVID-19, the highest total of the pandemic, he said in an online briefing.

Cases among children could halt the slow decline in recent weeks from the peak of the Delta variant wave, Dunagan said.

“Given Delta, and if you are in a school district where they do not insist on masks, I think we will see this spread like wildfire,” he said.

Missouri is now starting the fifth month of the Delta variant wave. It is possible September will be the first month since May when overall cases decline statewide. University of Missouri professor of immunology Marc Johnson, who analyzes wastewater samples for the Department of Health and Senior Services, said recent results have “plateaued at a high level.”

The department reported 78,084 COVID-19 infections in August, up 28 percent from July and the most since January. While every week of August had higher average daily case numbers than July as a whole, daily case numbers peaked in the first week of the month.

The department reported 943 COVID-19 deaths in August, with 355 occurring in July or earlier. The 588 deaths reported for the month so far make it the deadliest month of the pandemic since January. The total of 10,610 deaths among people with lab-confirmed cases does not include more than 1,000 deaths recognized by local health departments across the state.

Only five of the state’s 117 local health jurisdictions reported declining infection rates in July. That number increased to 32 in August, with the biggest drops in southwest Missouri.

A spike in viral loads in wastewater is a very strong indicator that cases will escalate in a community. Johnson, who first found the Delta variant in wastewater from Branson in early May, correctly predicted in late June that cases would triple in July rates and, at the end of July, that the crest would be in mid-August.

The latest samples show increasing viral levels in eight communities, declining levels in five, and little change in the rest that are sampled.

“The places that are spiking now are the places where the Delta variant arrived late,” Johnson said.

The St. Louis metropolitan area has the lowest regional infection rate in the state over the past month. There was a regional decline in mid-August but has seen little additional decrease.

Only St. Louis and St. Louis County, however, are below the regional average for cases.

“I think that both the city and the county jumped on very early the need to return to masks and social distancing,” Dunagan told The Independent. “What I observe out in the community is a complete change in behavior. People are being much more cautious. I think we have flattened the curve compared to what we would have seen if we had just ignored it.”

In other parts of the metropolitan region, there is active resistance to masks and quarantine, Dunagan said.

“I was on the phone to Jefferson County, where they only have two school districts willing to have mask requirements, and they have parents who are refusing to quarantine their kids who are infected with COVID,” he said. “They are dropping them off at school.”

The fight over whether masks should be required by local governments and schools is playing out in the courts and is also playing out in clinical results. On Monday, the City of Independence warned people who attended a meeting two weeks ago where the city council rejected a mask order that they may have been exposed to COVID-19 at the meeting, the Kansas City Star reported.

The newspaper also reported that the Jackson County Legislature voted 6-3 to extend its mask order.

In other COVID-19 related court action, on Tuesday, a Cole County judge rejected an attempt to restore pandemic unemployment benefits that Gov. Mike Parson stopped in June. Parson ended the state’s participation in the $300 per week federal pandemic increase in regular unemployment and programs that supported long-term unemployed and those not covered by the regular unemployment system.

Circuit Judge Jon Beetem wrote in his ruling that the plaintiffs didn’t have legal grounds for their lawsuit and he was being asked to rule on the wisdom of a policy decision.

The case cited sections of unemployment law that were last amended in the 1950s, Beetem wrote. He noted that the federal programs expire on Monday.

“Yet, Plaintiffs believe that a legislature from seventy years ago intended to confer a civil remedy on a class that only came into existence in the last year — and will only be around until next week — for benefits wholly unrelated to the law that legislature enacted,” Beetem wrote. “The court is unpersuaded.”

The increase in cases among children will have two major effects, Dunagan said.

The first is the risks for children who are hospitalized, usually children who have other underlying conditions that make them vulnerable.

The other effect will be on families, Dunagan said, “honestly as a threat to society, in that now they seem to be able to very easily spread it to families and in those families will be people who are much more vulnerable.”

That matches what LaRue is seeing in Carter County.

But in the earlier waves, children generally ended their quarantine without contracting COVID-19, he said.

“Now we are seeing those students test positive,” he said. “And most of those students who are developing symptoms as positive are in our upper elementary, so third, fourth, fifth, and sixth grades.”

The mask rule will remain in place for as long as needed, LaRue said. He said he has the backing of the Board of Education and the community.

Schmitt wants to take away that local control that is so important to communities, he said, adding that no one wants to be wearing masks. The year opened without masks, he noted.

“Everybody,” LaRue said, “wants to get back to normal as soon as possible.”