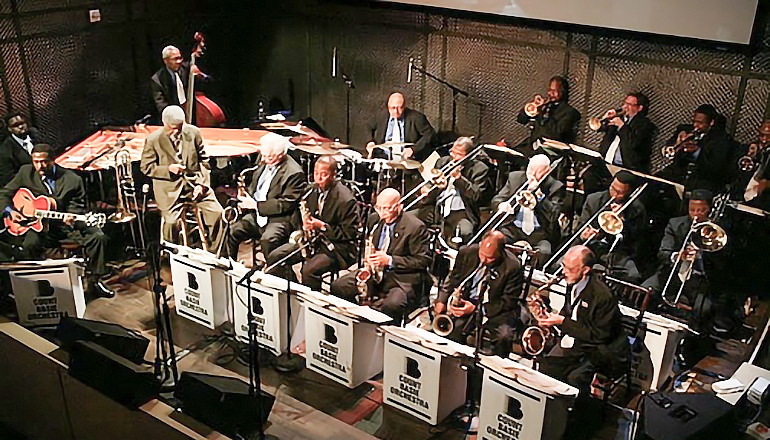 The legendary Count Basie Orchestra comes to the Arrow Rock Lyceum Theatre for a show on Sunday, April 24, 2022.

Featuring members personally chosen by him, more than 30 years after his passing. Pianist and bandleader William James “Count” Basie was and still is an American institution that personifies the grandeur and excellence of jazz.

The Count Basie Orchestra, directed by Scotty Barnhart, has won every respected jazz poll in the world at least once; collected 18 Grammy Awards; performed for kings, queens, and other world royalty; and appeared in several movies, television shows, at every major jazz festival and major concert hall in the world. The latest honors are the 2018 Downbeat Readers Poll Award as the No. 1 jazz orchestra in the world, and a Grammy nomination for their 2018 acclaimed recording, All About That Basie, which features special guests Stevie Wonder, Jon Faddis, Take 6, and Kurt Elling, among others. It follows their critically acclaimed release in 2015 of A Very Swingin’ Basie Christmas, the first-holiday album in the 80-year history of the orchestra. A BBC-produced documentary on Count Basie and the orchestra entitled Count Basie: Through His Own Eyes premiered on PBS in the US and UK in 2019, coinciding with the orchestra’s 85th anniversary.

Scotty Barnhart is an internationally acclaimed jazz trumpeter, composer, arranger, educator, author, producer, two-time Grammy winner, and director of The Count Basie Orchestra. Before being selected director in 2013, he was its featured trumpet soloist for 20 years, and in 2015 was executive producer of A Very Swingin’ Basie Christmas! Released in 2021, The Count Basie Orchestra Live At Birdland was also produced by Barnhart.

Featured vocalist Carmen Bradford followed in the footsteps of her great family legacy as the daughter of legendary cornetist/ composer Bobby Bradford and renowned jazz vocalist/composer/author Melba Joyce. Her grandfather, big band vocalist Melvin Moore, sang with Dizzy Gillespie’s Band in the 1940s. At age 22, Bradford was discovered and hired by William “Count” Basie and was the featured vocalist with his orchestra for nine years. She has since performed and/or recorded with Wynton Marsalis, Nancy Wilson, Lena Horne, Doc Severinsen, Frank Sinatra, Willie Nelson, the National Symphony, Rochester Philharmonic, Dallas Symphony, and countless Symphony Orchestras and artists across the world. She has returned to her big band roots and continues to perform with her Count Basie family whenever possible, along with teaching jazz voice at the San Francisco Conservatory of Music in the R-JAM Program (Roots, Jazz, and American Music).

Single tickets for The Count Basie Orchestra concert start at $65, with premium seats available for $125, and you can purchase tickets at this link. The one-show-only performance takes place at 2 p.m. on Sunday, April 24. For tickets, visit LyceumTheatre.org or call 660-837-3311