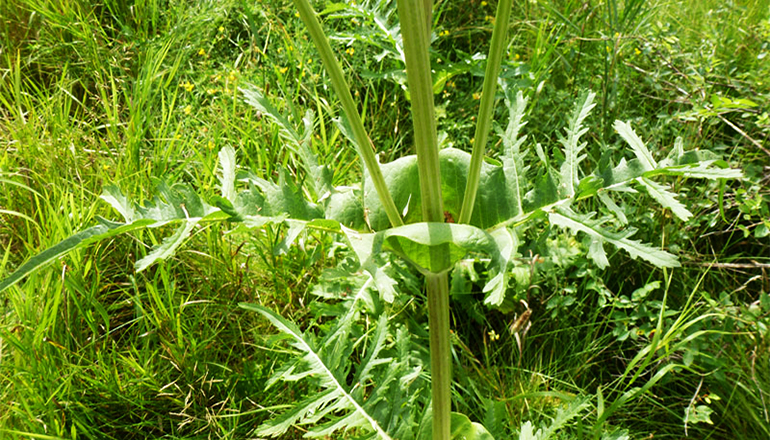 Cut-leaved teasel, as well as the closely related common teasel, is a biennial weed and one of the 12 weeds that the Missouri Department of Agriculture classifies as a noxious weed.  Once teasel is established in an area, it can be very difficult to control, making management important before the weed becomes a wide-spread pest.

Teasel is native to Europe and is believed to have been brought to the United States in the 1700s for use in the textile industry. The prickly seed heads were used to “tease” the wool fibers prior to spinning, which helped the plant derive its name. The use of mechanical teasing methods eventually proved more economical, leaving teasel plants with no market in the United States. Although initially grown in the eastern U.S., teasel has now found its way into nearly every state in the U.S., primarily traveling along highway corridors.

Teasel plants are commonly confused with thistles due to their prickly stem, leaves and seed head. Like thistles, teasel completes its life cycle in two years. In the first year, it forms a basal rosette with long, oval, irregularly lobed leaves. During the second year, a stem forms and the plant can reach heights of 5 to 7 feet. Leaves are oppositely arranged around the stem and form a cup that can hold water near the stem, providing the plant a competitive advantage. At the top of the stem, white or purple flowers will form in a dense, oval shaped seed head. Spiny bracts will curve upward from the stem around the seed head. Each seed head can contain over 800 seeds while each plant produces up to 3,000 seeds. The seeds are not spread by wind or animals and remain near the parent plant, allowing teasel to form dense communities that eliminate natural vegetation.

The spread of teasel has mostly occurred along highways and interstates throughout the United States. Teasel prefers undisturbed or unmanaged areas, often being found on roadsides, pastures, railroad right-of-ways and open meadows. Over 99% of teasel seeds fall within 5 feet of the plant, but it has still managed to reach nearly every state. Mechanical control along roadsides may aid in its spread. Mature seed can land on mower decks during late season mowing applications and spread as the mower travels along the road.

Control of cut-leaved teasel can only be achieved by removing established plants and preventing the spread of viable seeds. Mechanical methods such as mowing, burning and hand roguing have proven successful for small patches, but are not feasible with large infestations. Mowing teasel prior to flowering can help limit seed production, but the plant may then produce new shoots that can produce viable seed. Applications of herbicides appear to be the most promising method for teasel control.

When choosing an effective herbicide mixture to control teasel, it’s important to consider the life stage of the plant and other existing vegetation. Herbicide applications are most effective when teasel is still in the rosette stage and can be applied in either the fall or early spring. Growth regulators such as 2,4-D, triclopyr, dicamba, and picloram can help kill emerged populations of teasel without harming nearby grass species. Non-selective herbicides such as glyphosate and paraquat are also effective but will damage all emerged vegetation. Multiple applications may be required for complete control, as teasel can emerge in both the spring and fall. An herbicide with soil residual activity such as imazapyr can help prevent the emergence of new teasel plants. For complete control, applications should be made for several consecutive years. After 3 years, 97% of teasel seed is non-viable, so control should last at least that long.

For more information on identification or control of teasel, contact Andy Luke at 660-425-6434 or [email protected], Agronomy Specialist with the University of Missouri Extension in Harrison County, your one-stop source for practical education on almost anything.