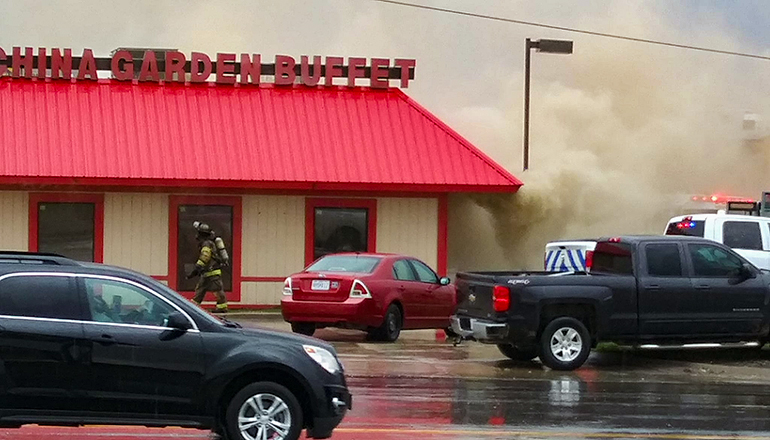 A Chillicothe business was destroyed by fire on Tuesday.

Firefighters responded to the China Garden Buffet Restaurant at 1023 South Washington. Flames were visible inside the business as firefighters arrived. While en route, Chillicothe dispatch advised everyone inside the restaurant had been evacuated.

At approximately 4:40 pm Tuesday, firefighters found heavy smoke and flames coming from the main entrance. Personnel began using multiple hand lines to enter the building to try and extinguish the flames. Connections were made to a fire hydrant to supply all the lines in use. CMU and Liberty were advised to disconnect utilities.

An initial report from Captain Tracy Bradley noted soffit was removed from the ends of the building because there was fire located between the ceiling and the attic area. When firefighters were unable to reach it, they used the Ladder bucket truck to reach the roof and began cutting holes to ventilate and release the heat. A fan was placed on the north side of the building to begin ventilation.

Chillicothe Fire Department used approximately 16,000 gallons of water in battling the blaze at China Garden Restaurant in the south part of Chillicothe.  They were on the scene for approximately three hours late Tuesday afternoon and evening.

The Trenton Fire Department, on mutual aid, responded to be on standby at the Chillicothe Fire Station if needed.