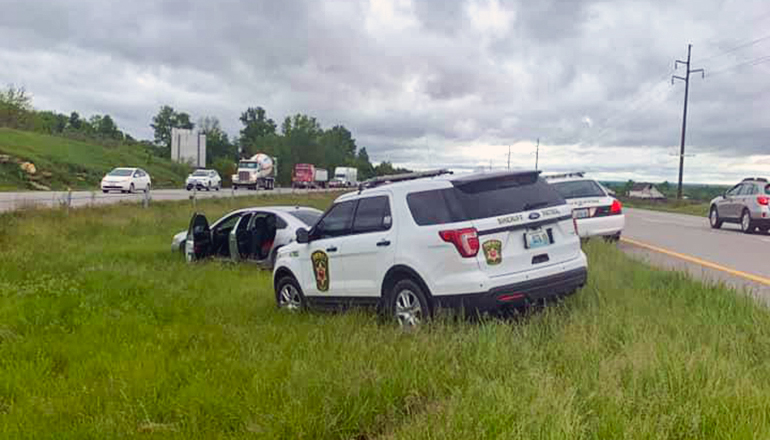 Chillicothe Police today provided some details on the stolen car and pursuit from Monday that ended when the vehicle stopped in Clay County and a driver was arrested.

In the 200 block of Washington Street, police said the owner of the car had gone inside a business, during this time, a male in a hooded sweatshirt got into the car and drove west on 2nd Street. An officer then observed the car leaving the city limits going west on Highway 36 but in the eastbound lanes. Police attempted to stop the car but terminated the pursuit for safety of motorists.

Officers and deputies in Cameron, Clinton County, and Clay County attempted to stop the fleeing car. It eventually stopped once the tires struck spike strips placed by deputies on Interstate 35 near Kearney.

Chillicothe Police said the male suspect has been on probation for felony thefts of motor vehicles in Chillicothe and Livingston County. Police noted there’s also an active probation violation warrant and additional charges are pending in several jurisdictions.

Police noted the stolen vehicle was recovered, a suspect arrested, and the investigation was stabilized within two hours. The name of the suspect has not yet been released.

Monday afternoon, Chillicothe Police took a report from the 200 block of South Washington Street regarding the theft of newly-purchased tools. The owner told police a male entered his truck and stole a four tool combo set while a female ran from the business and got into the driver’s seat of a Jeep which then quickly left the parking lot.

Chillicothe Police are following up on leads as the investigation continues.