(St. Joseph News Press) – Testimony in a bond hearing Wednesday revealed an ongoing criminal investigation against an Amish man charged with poisoning his own wife. Samuel Borntreger appeared in a Harrison County courtroom Wednesday on a charge of first-degree murder in the death of his wife, Anna Yoder Borntreger, in 2006. Authorities raised the […]

Chillicothe fire department responded to a pickup truck fire yesterday on LIV Road 238. Fire Chief Darrell Wright reported the 2006 GMC pickup was totally involved when firefighters arrived. The cause is undetermined. The truck was owned by Tanner Roberts of 14122 LIV Road 238. Wright quoted Roberts as saying he was driving when he […]

North Central Missouri College reports seven semi finalists are considered for the next college president. There had been ten candidates last month narrowed from an original list of 40 applications. Three of the ten though have since withdrawn. After interviews were completed last week, the college presidential search committee discussed and scored the semi finalists. Those seven […]

(KTVO) – LA PLATA, Mo. — Authorities arrested a Kansas City man Saturday at a northeast Missouri train station on charges of smuggling large amounts of illegal drugs. Nathaniel D. Bales, 41, is charged with first-degree drug trafficking and felony possession of a controlled substance. Drug trafficking in the first degree is a class A […]

Fire Friday afternoon at Trenton destroyed a mobile home at 1908 Colt. Nobody was home at the time. The owner of the property was listed as Robert Allen. Trenton Fire Marshall Robert Romesburg said the blaze was fully involved when firefighters arrived. Lieutenant Romesburg reported a faulty meter box caused a short resulting in an […]

RIVERSIDE, Mo. — Law enforcement authorities revealed Monday that all four unidentified homicide victims and a pet dog found at a fire at 4170 Buena Vista Road in Edgerton, Missouri, were incinerated outside the residence with an accelerant. Platte County Prosecutor Eric Zahnd and Platte County Sheriff Mark Owen held a press conference to update […] 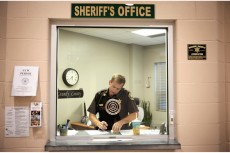 Three arrests are in today’s report from the Grundy County Sheriff’s Department. Ninteen year old Dillon Pratt of Trenton faces four counts of tampering with a motor vehicle in the first degree. Pratt is accused of acting in concert with one or more persons to deface four motor vehicles January 20th and 22nd. Authorities reported […]

At a meeting of the Grundy County Nursing Home District Board, members approved a program that begins to provide adult day care services at the nursing home for a limited number of clients.

A Gilworth Furniture store is to open at Five Points in downtown Trenton on March 7th. The building at 1001 Main Street, owned by Larry Gilworth, has been undergoing repairs and passed a city inspection Monday. The Trenton Building and Nuisance Board last night voted to allow the building to be occupied. In effect, the […]

A mother and two children were taken to the hospital after being assaulted by a man near 13th and Charles streets early Saturday afternoon. The incident was reported around noon when residents in the Museum Hill District heard screaming and called police. “He was using a wooden stick,” St. Joseph Police Department Officer Roy Wedlow […]

After just making new year’s goals and during tax preparation season, this is the perfect time to do a self-assessment of your financial well-being.