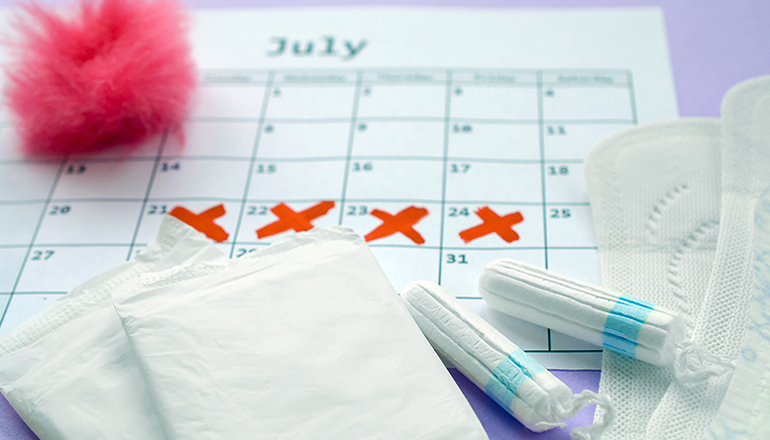 Some are forced to pay to buy tampons and pads to meet their needs, while others are provided with such low-quality products they end up having to make their own.

A bipartisan coalition of lawmakers hopes to change that with legislation that would ensure free, adequate feminine hygiene products are provided not just in state prisons but also in local jails.

Thirteen other states already have similar laws in place, according to a 2019 American Civil Liberties Union brief.

“This isn’t a Republican or a Democrat issue,” DeGroot said during a February committee hearing on the bill, “it’s an issue of human decency, human dignity.”

For Twyla Adair, who was released from federal prison in 2020 after serving almost four years, access to feminine hygiene products has been patchwork in the criminal justice system.

“This was not my first trip to prison. Unfortunately, I have served time in the Missouri and Kansas Department of Corrections,” Adair wrote in written testimony in support of the bill. “Every place I have been, there has been a constant struggle to receive the proper personal hygiene care that a woman needs during menstrual times.”

The bill faced no witnesses testifying against it in the House Corrections and Public Institutions Committee in late February and unanimously passed out of committee two weeks later. It currently waits to be brought up for debate on the House floor.

With only two weeks left in the legislative session, lawmakers have pinned their hopes on other vehicles that are further along. The provision has been amended onto at least six Senate bills moving through the House.

But even without the bill’s passage, DeGroot is hopeful a new source of state funding will ensure cost won’t be a barrier.

A $240,000 line item is included in both the House and Senate versions of the proposed budget for the Department of Corrections to provide reimbursements to counties and cities for providing feminine hygiene products at a local level.

That’s in addition to the nearly $230,000 already appropriated to the Department of Corrections to purchase feminine hygiene products, according to a fiscal note on the proposal.

DeGroot said he hopes the funding can become a permanent feature, because “it’s just not all that much money to give these women just a bit of their dignity back.”

Groups like the American College of Obstetricians and Gynecologists, National Association of Social Workers Missouri Chapter, and American Conservative Union are in support of the legislation and have said it will help improve the health and well-being of women in prison.

In 2018, Missouri Appleseed, a nonprofit affiliated with a national network of centers that focuses on issues at the intersection of criminal justice reform and public health, surveyed 90 incarcerated women in addition to Department of Corrections nurses and case managers to assess the scope of the issue.

“And what we found was that over 80 percent of women were making their own products because what was being provided for free was a poor quality pad,” said Liza Weiss, Missouri Appleseed’s executive director.

Sen. Bob Onder, a Lake St. Louis Republican and physician, said on the Senate floor last month that infections can lead to serious health consequences, like Toxic Shock Syndrome, a rare, life-threatening condition that occurs as a result of a bacterial infection.

“It is far less expensive to cover these products for women in jail and in prison than it is to treat the medical complications,” Onder said when adding the measure as an amendment to Senate Bill 128.

According to the MOST Policy Initiative, a nonprofit that aims to connect science and policy, Missouri has one of the fastest-growing female prison populations in the U.S., increasing by 33 percent from 2007 to 2016.

Meanwhile, the cost of higher-quality feminine hygiene products in Missouri prison commissaries is about $6 for 18 pads or 20 tampons, according to a MOST Policy Initiative memo on the topic. As of 2017, Missouri inmates’ base pay was 33 cents per hour, with a three-cent increase for those with a high school diploma, or about $7.50 to $8.50 a month.

“The cost of these products in canteens means approximately 70-80% of an incarcerated individual’s monthly wage may be used to buy feminine hygiene products each month,” the memo read.

The First Step Act, signed by President Donald Trump in 2018, mandated that the Federal Bureau of Prisons provide free tampons and pads that met industry standards — formalizing a 2017 policy the bureau adopted.

After Missouri Appleseed’s 2018 survey, the Missouri Department of Corrections implemented a policy providing free quality pads and tampons in state prisons, and state lawmakers allocated funding to assist with that effort, Weiss said.

From there, the organization has worked with local jails to do the same.

DeGroot said a concern early on that tampons may be used to hide contraband, didn’t materialize this session after law enforcement groups saw the program would be funded. Law enforcement associations did not testify against the bill in committee. The Sheriff’s Association did not respond to a request for comment.

For DeGroot, the bill’s passage would mean something on a personal level, too. Growing up, his family received assistance through food stamps until he was in high school, he said.

“And we used it as a hand-up program to help us get out of the bad economic situation we were in,” DeGroot said.

He hopes this bill can be a similar hand-up for women in prison to help restore a bit of dignity.

“And hopefully they’ll use that, and not just that, but other things that they’ve learned, and get out of prison and be productive members of society,” DeGroot said.