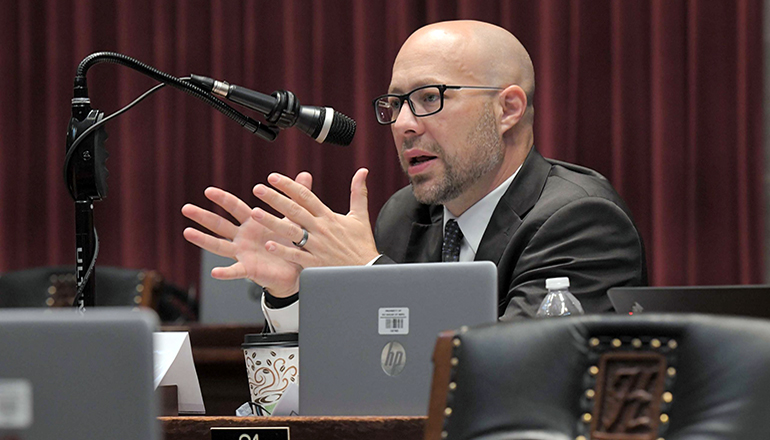 (Missouri Independent) – The biggest item in a $1 billion supplemental spending bill would set aside money for a new method of making Medicaid payments, but exactly how it would work or how much it would cost is unknown.

The House Budget Committee on Tuesday held a public hearing on the bill that would also increase payments to home health care providers and hire 15 new attorneys to eliminate some waiting lists for public defender services. The committee will vote on the spending package Thursday or next Monday, Chairman Cody Smith said.

The bill is in addition to the $32 billion in regular operating appropriations approved last week in the Missouri House. The bill heard Tuesday is Smith’s plan to use money not spent on Medicaid expansion. He introduced it after the committee defeated a spending bill for the $1.9 billion expansion cost in a party-line vote.

Smith said he wants to get his legislation to the state Senate while it is still considering the first 13 spending bills. Lawmakers must complete work on the state budget by May 7.

“You should probably anticipate we would move quickly, get it to the Senate with time for them to consider it,” he said.

The bill sets aside $250 million in surplus funds for “transition payments” to providers who would see changes in the way Medicaid pays for their services. That state allocation would draw $485 million in federal matching funds, for a total of $735 million out of the spending bill’s $1 billion total costs.

The new payment methods haven’t been designed and the amount is speculative, but there will be some cost to change and the appropriation can be refined, Smith, R-Carthage, told the committee.

“I am not sure it is the right amount,” he said. “It is certainly not a finished product but I wanted to offer this for consideration.”

The surplus fund being tapped for the money is from an increase in federal matching payments for Medicaid called an enhanced FMAP rate. The federal share was increased last year when President Donald Trump declared a public health emergency.

State Rep. Peter Merideth, the ranking Democrat on the committee, said he was pleased to see Smith use the surplus money, but lamented that it is not also being used for Medicaid expansion.

Missouri voters approved expanding Medicaid eligibility under the Affordable Care Act in August. The state share of the $1.9 billion costs would be about $130 million.

The $50 million set aside for a 5.3 percent increase in rates for home health care providers is designed to relieve pressure on agency budgets from recent minimum wage increases. During the committee’s discussion, members noted that the recent American Rescue Plan increases the federal share for those services, which will bring the state about $220 million.

But with no firm guidance on how to spend the additional money, Smith said the committee should approve the item and change it later if needed.

About $12 million of the $50 million is general revenue and the state may be able to forego that cost, he said.

“For the committee, to fully understand, this is probably a wait-and-see type of scenario,” Smith said.

The $1 million for 15 new attorneys in the Office of Public Defender will add enough new lawyers in offices being sued over defendant waiting lists to clear those lists, Director Mary Fox told the committee. It is not enough to clear the waiting list statewide, which has grown to about 2,000 defendants, she said.

In February, Circuit Judge Will Hickle ruled that making defendants wait for representation is a violation of their civil rights. Hickle said he would order judges in circuits with waiting lists to order private attorneys to represent defendants on the list and bill the public defender system.

The order only applies in the local jurisdictions where defendants sued over their waits, which for some defendants have lasted a year or longer. The total cost to eliminate waiting lists entirely, and avoid further litigation, is 53 attorneys at a cost of about $2.8 million, Fox said.

“If we want to just solve this problem and move on, 53 should do it,” she said.