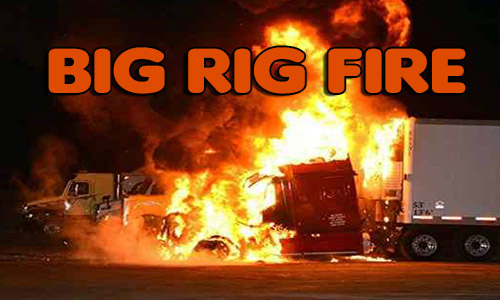 Chillicothe and Wheeling firefighters extinguished the blaze with the damage described by Chillicothe Fire Department Captain Derrick Allen as a total loss to the truck and trailer from the crash and fire. Diesel fuel spilled into Medicine Creek.

The crash happened on westbound Highway 36 at the Medicine Creek Bridge west of the Wheeling junction. The truck, with the driver from Illinois, went off the road, hit the bridge rail, ripped a fuel tank, and caught fire. The trailer was empty of cargo but did have some stacked items.

Captain Allen reported the truck and trailer were engulfed in flames when firefighters arrived, finding the vehicle across the bridge blocking all westbound traffic. Firefighters used approximately three thousand gallons of water and 25 gallons of firefighting foam to extinguish the fire. Hazmat booms were used in an attempt to control the fuel which leaked into the creek.

The Missouri Department of Natural Resources later sent a crew to clean up the fuel spill. The Missouri State Highway Patrol and Livingston County Sheriff’s deputies also responded to the scene.

The big rig was still blocking traffic for a time on Saturday morning, with no injuries reported during the incident.