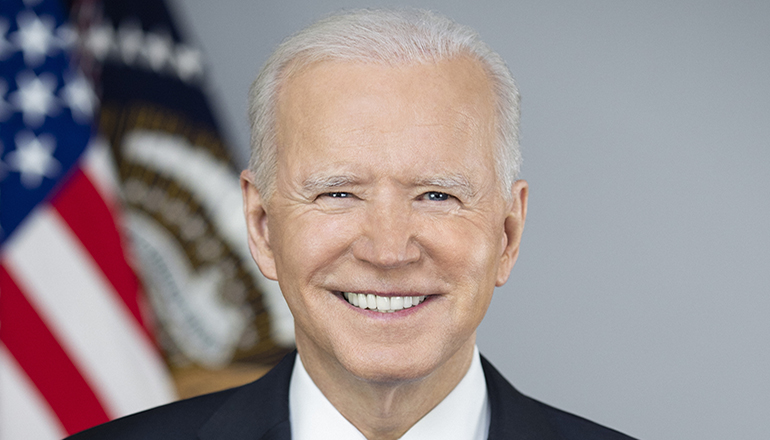 (Missouri Independent) – President Joe Biden used his first State of the Union address on Tuesday night to reassert America as a leading global voice for democracy and condemn Russian President Vladimir Putin for starting an “unprovoked” war in Ukraine.

“Throughout our history, we’ve learned this lesson – when dictators do not pay a price for their aggression, they cause more chaos,” Biden told a joint session of Congress meeting in the U.S. House chamber. “They keep moving. And the costs and threats to America and to the world keep rising.”

Biden called on Congress to “send an unmistakable signal to Ukraine and to the world,” as he pointed to the gallery above the House floor where the Ukrainian Ambassador to the United States Oksana Markarova joined first lady Jill Biden as one of her nine guests.

In a moment of unity, lawmakers rose, waved small Ukrainian flags, and cheered on Markarova and the people of Ukraine as they battle the Russian invasion.

“From President Zelenskyy to every Ukrainian, their fearlessness, their courage, their determination, inspires the world,” Biden said.

But Biden also spent a significant amount of time on issues challenging Americans every day, including inflation, gun violence, and the country’s path out of a two-year-long pandemic that’s claimed the lives of nearly 1 million Americans.

“We meet tonight in an America that has lived through two of the hardest years this nation has ever faced. The pandemic has been punishing,” he said.

The event also saw a sharp reminder of the tensions and extreme partisanship that have marked Congress in recent years, particularly in the aftermath of the 2020 presidential election.

As Biden spoke about burn pits that have caused illnesses among Iraqi war veterans and mentioned the death of his son, Beau, Republican Rep. Lauren Boebert of Colorado interrupted. She shouted from the floor of the chamber that he is to blame for the deaths of 13 soldiers who died in August during the U.S. withdrawal from Afghanistan.

Democrats booed her. One lawmaker said, “Someone kick her out.”

Boebert and Georgia Republican Rep. Marjorie Taylor Greene also were both seen standing and yelling for Biden to “build the wall” during a portion of his speech that focused on immigration policy.

In a major policy announcement on Ukraine, Biden used the speech to say that U.S. airspace will no longer be open to Russian aircraft. He received a standing ovation.

The new restriction, on top of several rounds of economic sanctions announced last week, shows ongoing unity among Western democracies. The European Union and Canada have already blocked Russian planes from their airspace.

Concern over the war in Ukraine was reflected throughout the audience, with members of Congress wearing the bright blue and yellow colors of Ukraine’s flag, or displaying sunflowers, the national flower. Jill Biden’s violet dress had a sunflower added to the sleeve just above her wrist.

During the speech, Biden laid out his view of American foreign policy and defense strategy amid a renewed drive from Putin to expand Russia’s borders. Biden said that he and American allies are working to secure oil barrels and announced that the U.S. would be “releasing 30 million barrels from our own Strategic Petroleum Reserve” to “help blunt gas prices here at home.”

“A Russian dictator, invading a foreign country, has costs around the world,” he said.

The speech could be Biden’s last to a Congress controlled by Democrats, and he sought to use it to speak directly to Americans — and seemingly reluctant members of his own party — about domestic policies he believes could improve daily life and the economy.

Some of those policies, which he’s pushed for in his social and climate spending package known as Build Back Better, include providing universal pre-K and child care, capping the cost of insulin at $35 a month, and investing in community colleges.

He also called on the Senate to pass the Freedom to Vote Act, which would prevent gerrymandering, protect poll workers and require all states to offer at least two weeks of early voting, as well as establish a national voting day, among other provisions. That legislation has stalled in the chamber amid opposition from members of Biden’s own party.

Guests from Ohio and Virginia

The first lady’s other eight guests, many of whom advocate for policy changes backed by the Biden administration, came from throughout the country.

Joshua Davis, a 7th-grade student from Midlothian, Virginia, began trying to make school better for children with Type 1 diabetes when he was 4 years old, including lowering prescription drug costs.

Biden has repeatedly called on Congress to lower prescription drug costs, including for insulin. So far the proposals have stalled, though he redoubled his efforts during Tuesday night’s speech.

“Insulin costs about $10 a vial to make… But drug companies charge families like Joshua and his dad up to 30 times that amount,” Biden said. “For Joshua, and for the 200,000 other young people with Type 1 diabetes, let’s cap the cost of insulin at $35 a month so everyone can afford it.”

Patrick Gelsinger, the Chief Executive Officer at Intel, has become a leading voice on semiconductor manufacturing after announcing in January the company would build a $20 billion factory in Ohio with union labor.

Biden said Tuesday night that Intel would increase that investment to $100 billion if House and Senate lawmakers are able to work out the differences between dueling bills that would boost U.S. competitiveness with China and semiconductor manufacturing.

“If you travel 20 miles east of Columbus, Ohio, you’ll find 1,000 empty acres of land. It won’t look like much, but if you stop and look closely, you’ll see a field of dreams, the ground on which America’s future will be built,” Biden said.

Danielle Robinson, from Columbus, Ohio, advocates for soldiers and veterans who have become sick following exposure to burn pits while deployed overseas. Her spouse, Sergeant First Class Heath Robinson, was diagnosed with stage 4 lung cancer while on active duty as a combat engineer in the Ohio National Guard. He later died in May 2020.

The issue of providing health care for military members exposed to burn pits is particularly important to Biden, who has said he believes his son Beau’s death was caused by his exposure to burn pits while deployed to Iraq.

The Senate passed its version of a bill last month that would provide $1 billion to provide VA health care for veterans exposed to toxic substances since 9/11. The House is set to vote on its version of the legislation Wednesday, though the two bills are significantly different.

“When they came home, many of the world’s fittest and best-trained warriors in the world were never the same. Headaches. Numbness. Dizziness,” Biden said. “Cancer that would put them in a flag-draped coffin.”

The president pushed back on progressive Democrats’ call to “defund the police” and instead shift money meant for a police budget to other local agencies. Biden, as he has before, said “the answer is not to defund the police, the answer is to fund the police with the resources and training they need to protect our communities.”

Biden has also directed the Justice Department to focus on reducing ghost guns, which are homemade guns that lack a serial number, making them difficult for law enforcement to trace, as well as supply model “red flag” legislation that allows courts to temporarily remove a firearm from an individual who is distressed.

In a reminder of the continuing pandemic, despite declining infection levels, a handful of members did not attend the speech because they tested positive for COVID-19. A majority of lawmakers, both Democrats, and Republicans, Cabinet officials, and Supreme Court justices, did not wear masks.

Rep. Jamie Raskin, a Maryland Democrat, said in a statement that he tested positive for COVID-19 and was disappointed he would not be able to attend the address.

“I will be cheering for President Biden’s powerful call to the world to continue to reject in every way possible Vladimir Putin’s illegal war of aggression against the people of Ukraine,” he said. “All of us must stand strong against authoritarianism and for democracy.”

The lawmakers who did attend were spaced out throughout the House chamber, instead of seated directly next to each other the way they were before the COVID-19 pandemic began.

Some of those members were seated in the gallery overlooking the House floor, an area that pre-COVID-19 was generally reserved for special guests.

U.S. Secretary of Commerce Gina Raimondo was nowhere near the Capitol building Tuesday night after being named this year’s so-called designated survivor. The somewhat morbid tradition requires at least one person in the line of succession, typically a Cabinet member, to be in a separate location in case everyone else in the line of succession dies while at the State of the Union.

Reynolds rebuked Biden and Democrats for sending the country back to the late 1970s and early 1980s when “runaway inflation was hammering families, a violent crime wave was crashing on our cities, and the Soviet army was trying to redraw the world map.”