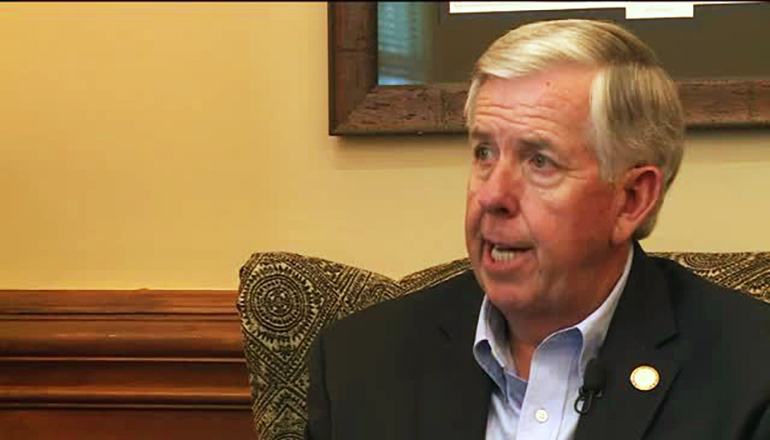 Top Biden adviser Jeff Zients said anyone mischaracterizing the administration’s attempts is “doing a disservice to the country.”

Gov. Mike Parson voiced his opposition to door-to-door vaccination outreach on Wednesday amid an influx of federal help that the state requested aimed at tamping down a surge in COVID-19 infections there.

The first member of a newly created federal surge response team arrived in Missouri this week, with others to join in person and remotely to help with data, research, vaccine uptake strategies, and outreach.

Parson, a Republican, wrote on Facebook that he instructed state health department officials “to tell the federal government that sending government employees or agents door-to-door to compel vaccination would NOT be an effective OR welcome strategy in Missouri.”

Zients, the COVID-19 response coordinator for the White House, was asked about Parson’s comments at a press briefing on Thursday. Zients first emphasized that federal efforts to persuade unvaccinated individuals to get a shot rely in part on “trusted messengers,” such as local doctors and community leaders, who are typically the people consulted for such advice.

Those efforts have had an impact on vaccinations across communities, Zients added, before responding more directly to Parson’s social media post, without mentioning him by name.

“For those individuals, organizations, that are feeding misinformation and trying to mischaracterize this type of trusted messenger work, I believe you are doing a disservice to the country and to the doctors, the faith leaders, community leaders, and others who are working to get people vaccinated, save lives and help end this pandemic,” Zients said.

White House Press Secretary Jen Psaki also responded to Parson’s remark during Thursday’s briefing, saying that engaging local leaders on vaccination outreach has been effective. That approach and other strategies have boosted vaccinations in states like Florida and Georgia, she said.

Missouri is currently seeing COVID cases and hospitalizations spike thanks to low vaccination rates and the prevalence of the Delta variant.

Hospitalizations hit 1,000 inpatients on Saturday for the first time since early March. On Wednesday, Steve Edwards, CEO of CoxHealth in southwest Missouri, tweeted that his hospitals have seen more than 100 COVID inpatients and 12 deaths in the past 8 days.

“Likely all recent deaths were avoidable with vaccination,” he said, “perhaps a few would have had cold-like symptoms.”

At an event in Kansas City on Thursday, Parson doubled down, saying he would “object to the federal government coming in and going door-to-door to anybody’s house in Missouri if they don’t want that. I don’t know that there is any need for that.”

He said state officials “knew all along that there was going to be that hesitancy” about vaccines in Missouri. While his administration is now open to the idea of incentivizing vaccinations, something Parson initially opposed, he said: “I don’t think we need to be out there trying to scare people into taking a vaccine.”

Several federal “surge response” teams are working with Missouri and a handful of other states, including Nevada, as counties within those states combat rising infections. Those increasing case counts come after the national COVID-19 infection rate had been falling.

The federal teams will provide expert support from the Centers for Disease Control and Prevention on outbreak investigations; work with local health officials on getting more treatments for people with COVID-19; and help states increase vaccine competence and expand access to vaccinations and testing, according to the White House.

“In the days and weeks ahead, we will continue to make sure states have access to the specific federal resources and capabilities they need to fight the virus,” Zients said Thursday.

The areas where COVID-19 infections have been rising also tend to be the areas with the lowest vaccination rates, according to CDC officials.

Of the 173 counties with the highest case rates, the vast majority, 93%, have fewer than 40% of their residents vaccinated, said Dr. Rochelle Walensky, director of the CDC.

She emphasized that the existing vaccines have proven to perform well against the Delta variant of the virus that’s accounting for a fast-growing share of U.S. COVID-19 infections and that areas with low vaccination rates will allow that variant to spread even more rapidly.

Preliminary data from several states during the last few months has indicated that more than 99% of deaths from COVID-19 were among people who were not vaccinated, Walensky added.

Asked specifically about the rising infections in southwestern Missouri, Walensky said that’s an area that federal officials are “following closely” due to low vaccination rates and the increasing case counts.

(The Missouri Independent’s Rudi Keller contributed to this story)