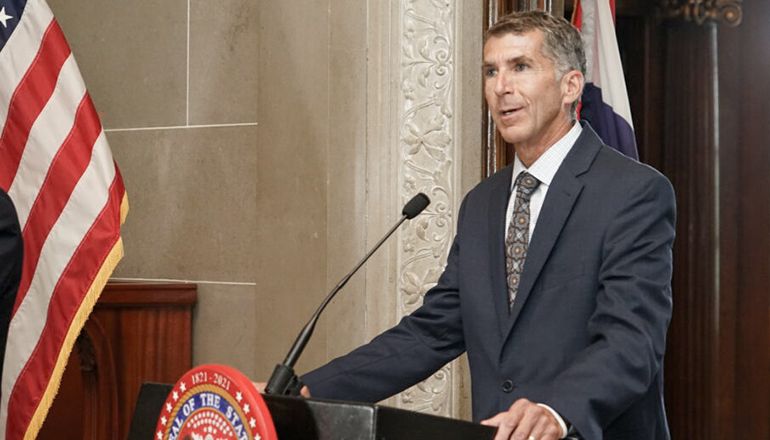 (Missouri Independent) – On the Friday before a drawn-out confirmation battle ended with his ouster from office, Missouri state Health Director Donald Kauerauf wrote an impassioned letter meant to convince conservative legislators who were on the fence about his appointment.

The message: While he believed in vaccines and data and science, he didn’t believe in vaccine mandates. Missourians, he wrote, also needed “greater trust in each other.”

That evening, Kauerauf thought he still had just enough votes to be confirmed. So the letter was never sent.

By the following Monday, the state Capitol was flooded with protestors demanding the Senate reject Kauerauf’s nomination. Many falsely claimed Kauerauf’s positive stance on COVID-19 vaccinations equated to support for a statewide mandate. One brought a sign labeling him, “Killer Kauerauf.”

He was grilled by state senators for two hours, some of whom questioned him about his wife’s public health job in neighboring Illinois and his views on how the state should regulate abortion. He described himself as “pro-life” and declined to answer further.

His letter to lawmakers, written at the behest of Adam Crumbliss, the health department’s director of its community and public health division, was deemed “too risky” to send, Kauerauf wrote to a colleague. Still, in a Google document, a draft of the letter was obtained through a Sunshine Law request as part of an ongoing collaboration between the Documenting COVID-19 project and The Missouri Independent. (Read the full letter here.)

In it, Kauerauf wrote that while data showed “masks and vaccinations reduce the speed and force” of COVID-19 transmission, Missouri would not mandate them. He also pledged to get through the pandemic with the “promotion of factual information, collaboration, and communication.”

“I stand by this commitment to the citizens of Missouri, and won’t waver,” he wrote. “My steadfast stance on no mandates, while protecting the freedoms that make America great, is the same today as it was in early September 2021 when asked by legislators during my first hearing.”

Kauerauf, who has yet to speak publicly about his confirmation failure, had come out of retirement after more than 30 years in public health and emergency management in Illinois, at the request of Gov. Mike Parson. He ended up serving just 150 days in office.

“Public sentiment has shifted in 30 years. Like it or not, the public health system is now in the fight of our lives.”

Kauerauf circulated the letter to a small group of Parson administration officials, including Crumbliss; DHSS general counsel and his successor as acting director, Richard Moore; and the health department’s legislative director, Michael Oldweiler.

Oldweiler wrote back that, while he liked the letter, he didn’t believe it “tips the needle” in terms of votes.

Whether it would have made a difference will never be known. Senators were inundated with calls and emails urging them to oppose Kauerauf, many with strikingly similar messages. The messages were obtained through Sunshine Law requests to several Senate offices.

“He worked for Illinois, which responded contrary to the way in which Missouri has and has been one COVID nightmare after another, with its nonsensical policies that have helped no one,” said seven emails to Sen. Bob Onder from residents in Defiance, Wentzville and Lake St. Louis.

“He has been on the team in Illinois that implemented vaccine passports, a plethora of COVID lockdown and mandate measures, he’s in opposition to Judge Green’s ruling regarding our constitutional rights and he’s a proponent of test-to-stay in K-12 schools,” read 10 other emails to Onder.

Individual messages were even fiercer.

By Tuesday, Kauerauf’s nomination had failed and he resigned. Under the Missouri Constitution, he’s barred from working in the Missouri health director job for life.

The state health department declined to comment and the governor’s office did not respond to requests for comment about Kauerauf’s unsent letter.

Fellow public health leaders in Missouri have described Kauerauf’s departure as demoralizing. It could also result in a chilling effect for those considering public health careers or, more broadly, public service, they fear.

“It’s just sad. He was gaining momentum and the rug was pulled out from under us,” said Lynelle Phillips, a former DHSS and CDC official who now serves as vice president of the Missouri Public Health Association and president of the Missouri Immunization Coalition. “There’s a lot of concern about how we can attract a quality leader like Don Kauerauf. Who is going to want to come here and go through that?”

In his letter, Kauerauf alluded to the far-reaching mission of the state health department and the growing divide between government leaders and those they serve.

Before the confirmation hearings, internal memos show Kauerauf had spent days preparing and plotting out the future for the Missouri Department of Health and Senior Services, a sprawling agency with about 1,800 employees and a $2.9 billion budget, all while juggling confirmation prep work and urgent health matters.

On the public health side, he had to respond to the unexpected, temporary closure of a 42-resident nursing home, Cedarcrest Manor in Washington, due to staffing shortages; arguments over the final 61 boxes of COVID-19 tests in the state stockpile, resulting in an emergency $2.66 million order of an additional 250,000 antigen tests; and a looming surge in COVID-19 cases in central Missouri.

For his confirmation hearing, Kauerauf’s staff had sent legislators responses about abortion and scheduled inspections of the St. Louis branch of Planned Parenthood (the next one is scheduled in the spring).

He requested and received a lengthy report about alleged COVID-19 vaccine issues reported to a publicly-accessible federal clearinghouse called the Vaccine Adverse Event Reporting System, or VAERS. It found that of nearly 8.3 million vaccine doses administered in Missouri, less than 1% have reported an adverse reaction. The report also notes that 211 death reports were submitted but that Missouri is not notified of the outcome of the resulting investigations by the FDA and CDC.

Kauerauf also had staff prepare data on regulated medical marijuana facilities in Missouri, which was legalized by voters in November 2018. Since the first legal sale of marijuana in 2020, sales have topped $200 million with 85 licensed sellers, according to state estimates, drawing the ire of some conservatives.

More broadly, he spoke to AmeriCorps about collaborating on community testing and serving seniors. He weighed leveraging Missouri’s extensive network of trails to promote healthy eating habits and exercise in a state that ranks near the bottom in rates of diabetes, youth smoking, heart disease, and obesity.

And after finding an unused $6.4 million in COVID relief funds, originally meant for vaccine gift cards, Kauerauf mulled ways to pay for transformative projects for the health agency — including revamping an outdated data collection system where at least 100 different computer applications are used by staffers, according to a confidential Deloitte analysis of Missouri’s public health needs.

To one stakeholder, he wrote:

“Before addressing some of the specific program goals, I’d like to begin to change the general culture of health in Missouri. I realize this won’t be an easy task.”

Privately, Kauerauf acknowledged he didn’t expect the level of vitriol from fellow Republicans in getting confirmed to a job he felt qualified for.

“This isn’t what I expected as my route to confirmation when I accepted the position,” he wrote to a local health official on the Friday before leaving office. “However, these are the cards that have been dealt. I’m going to be true to myself and leave it to my faith to determine if this is where I’m supposed to be planted.”

He was even more circumspect to a colleague later that night, also by email: “I don’t know if I was fighting back for my staff, all public health leaders that have been abused over the last 24 months, or the common citizen who is tired of the hatred and bullying that is commonplace in society now.”

To another colleague on Monday, a day before he resigned, he wrote:

“I won’t lie to you and say that I didn’t have the thought cross my mind if this was worth the personal attacks.”

In his brief tenure as state health director, Kauerauf was forced to walk an increasingly thin line between his roles as a public health leader rooted in data and science and a political appointee in a Republican administration that has firmly rejected proven public health measures, like mask mandates.

On Dec. 1, the day a politically-damaging story about an internal study on the effectiveness of mask mandates commissioned by the governor’s office appeared online, two-state employees tasked with handling the media went to work to attack it.

“I want to sting a little,” the governor’s press secretary texted to her DHSS counterpart, in response to the article published by The Independent and the Documenting COVID-19 project.

Meanwhile, texts and emails reveal that Kauerauf was worried about both the political fallout and the larger public health repercussions of simultaneously promoting mask usage and shunning mask mandates.

“I hope I’m not causing too many issues for the governor,” Kauerauf texted the governor’s chief of staff, Aaron Willard, the following day, on Dec. 2. “I try and stay out of the media but it is following me everywhere I go.”

Willard empathized. The media, he explained, was out to get the Republican administration and “do everything possible to write a bad story, it’s not about objective news it’s about attacking those who believe contrary to their ideology.”

But Willard also noted that the governor’s office needed to be more clued in on media statements and requests in the future.

In response, the governor’s office and state health department prepared a list of bulleted talking points, and a scathing statement, a version of which was tweeted by Parson and posted to Facebook.

Behind the scenes, a more substantive debate was unfolding.

The day after the story ran, Kauerauf asked an analyst to write up a comprehensive look at “factors to consider when interpreting COVID-19 data.”

The result was a summary of seven factors that influence whether people live or die from COVID-19, in the context of mandates or government interventions: vaccination rates, reinfection or natural immunity, age, pre-existing conditions, social norms, access to care and socioeconomic status.

Missouri localities that have mask mandates, such as St. Louis and Kansas City, are successful in re-implementing them during surges because there is “significantly more local support.” The analyst gave an example:

At a Springfield restaurant that month, he saw a family sit at a table with masks on while waiting on their food to be delivered. “That is a level of compliance above even what was expected when mask usage was mandated in the area,” the analyst wrote. But once the mask mandate was set to expire in Springfield, more and more people could be seen without masks, even prior to the expiration date.