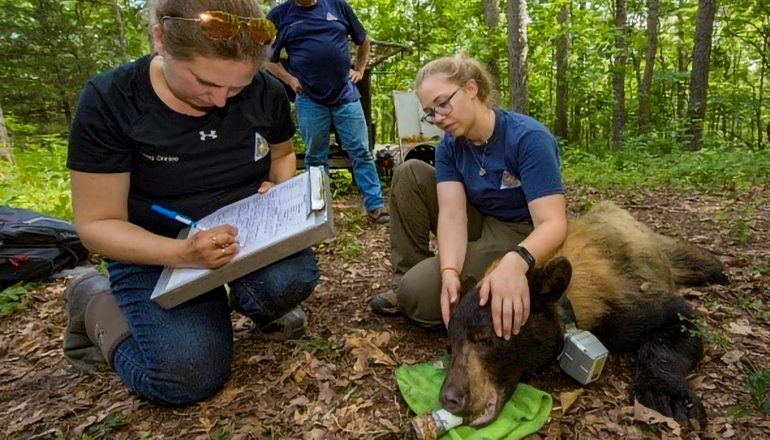 The black bear is one of the largest and heaviest wild mammals in Missouri with some reaching up to 500 pounds. It is also a long-distance roamer constantly in search of food. While black bears are usually very secretive and avoid encounters with people, a growing number of bears in the state is resulting in more encounters with and more interest in the big bruins.

According to the Missouri Department of Conservation, bear numbers in Missouri have increased significantly over the last 50 years and Missouri is now home to between 540 – 840 black bears. MDC also reports that bear numbers are increasing by nearly 9 percent each year and bear range in the state is also growing.

Bears on the Move

Conlee added that black bears also continue to be on the move around and through the state.

“Bear numbers are growing and sightings are becoming increasingly more common in areas of the state that have not seen bears for many years,” she said. “That also has more people interested in Missouri black bears. So far in 2020, we’ve already received nearly 250 bear reports with multiple reports coming from areas around Lake of the Ozarks and along I-44.”

An adult male black bear that attracted public attention earlier this year is an example of how far bears can travel and how many people are interested in them. The bear is suspected to have traveled from Wisconsin, through Illinois, and into Missouri in early July. It swam the Mississippi River from Illinois and entered the Show-Me State near Elsberry before making its way into St. Charles County near Wentzville. There, it found itself stuck between major highways just north of I-70 and near I-40/61 with a gathering of hundreds of people watching it nearby.

MDC staff found and immobilized the bear, placed tags in its ears, transported it to a nearby area of suitable bear habitat outside the very busy urban corridor, and released it unharmed. While MDC has not actively tracked the location of this bear, photos submitted by the public suggest that the bear has moved south through the Missouri Ozarks.

While this bear’s movements are not normal for an adult bear, Conlee noted that bears, especially young dispersing males, can travel long distances – including into places they may not be welcome.

Bears spend most of their time searching for food and are especially attracted to easy meals – including those provided by people. MDC encourages people to remove or properly store bear attractants from their property, such as bird feeders, trash, barbeque grills, pet food, and food waste.

MDC emphasizes that people should never approach or feed a bear. Intentionally feeding bears can be dangerous because it makes the bears comfortable around people. It can also lead bears to cause significant damage to property while searching for a meal.

“When bears lose their fear of humans, they could approach people in search of food or may defend the food sources or territory they associate with food provided by people, which can make them dangerous,” Conlee said. “When this happens, the bear cannot be relocated and has to be destroyed. A fed bear is a dead bear.”

While black bears are generally shy and non-aggressive, MDC emphasizes that people need to leave bears alone and make sure the bear has an escape route if encountered.

“Be aware of your surroundings,” Conlee said. “If there is evidence of a bear in the area, such as tracks or scat, avoid the area. While out in bear country, make noises such as clapping, singing or talking loudly to prevent surprising a bear. Travel in a group if possible and keep dogs leashed.”

For more information on Missouri black bears and how to Be Bear Aware, visit MDC online at mdc.mo.gov/bearaware.

The three goals of MDC’s Black Bear Management Plan are: