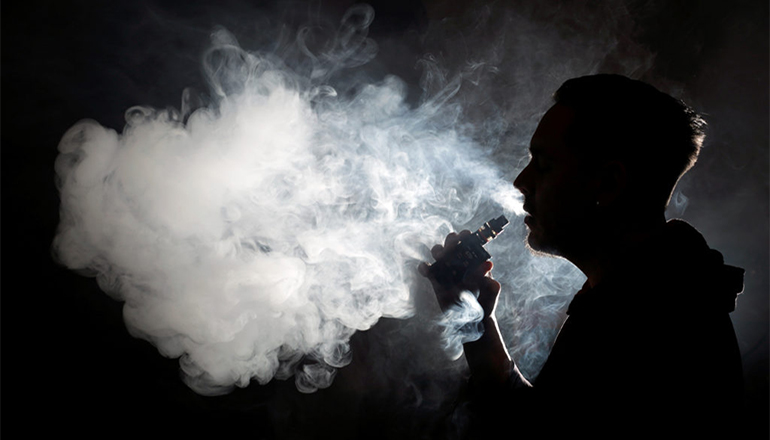 A Missouri man in his mid-40s died this week at Mercy Hospital St. Louis due to an illness associated with the use of e-cigarettes. This is the first vaping-related death in Missouri and the eighth nationwide.

Missouri Department of Health and Senior Services concluded it was a vaping-related lung injury after lung samples were taken of a Mercy patient who had a history of vaping but normal lung function prior to starting vaping in May 2019. He developed mild respiratory symptoms that worsened, leading to hospitalization on Aug. 22 before being transferred to Mercy St. Louis on Sept. 4.

“This is an unfortunate case of a young man with no prior lung illness who started vaping because of chronic pain issues,” said Dr. Michael Plisco, Mercy critical care pulmonologist and medical director of Mercy’s extracorporeal membrane oxygenation (ECMO) program. “He started out with shortness of breath and it rapidly progressed and deteriorated, developing into what is called acute respiratory distress syndrome (ARDS). Once the lungs are injured by vaping, we don’t know how quickly it worsens and if it depends on other risk factors.”

In the case of the Mercy patient, the man’s lungs were unable to provide enough gas exchange, leading to heart failure and near cardiac arrest. He was emergently placed on venoarterial ECMO in an effort to support his heart and rest his lungs.

“Unfortunately, because ECMO doesn’t fix the problem and only buys time for healing, it didn’t work in this case,” Dr. Plisco said. “Due to the nature of this critical illness, acute respiratory distress syndrome ultimately led to his death.”

Since the Missouri DHSS began advising, and now requiring, physicians to report possible vaping-associated pulmonary illnesses in late August, DHSS has received 22 reports from throughout the state of Missouri. Seven of these cases, including this first death, have been confirmed using the case definition developed by the Centers for Disease Control and Prevention (CDC). Nine are still under investigation, and six reports were investigated and did not meet CDC’s case definition.

“We are sad to report that this illness associated with vaping has now resulted in a death in Missouri and extend our condolences to his family,” said Dr. Randall Williams, DHSS director. “As previously stated, we encourage Missourians to follow the CDC guidance to refrain from using e-cigarette products if you are concerned about these specific health risks, especially while the investigation is ongoing.”

No infectious diseases have been identified with the illness, meaning it doesn’t spread from person to person. These lung illnesses are likely associated with chemical exposure from vaping. Patients report e-cigarette use and similar symptoms including:

DHSS and the CDC advise anyone using vaping products who experience the symptoms listed above to seek medical care promptly. In addition, if someone uses e-cigarettes, they shouldn’t buy products off the street (for example, e-cigarettes with THC or other cannabinoids). They also shouldn’t modify e-cigarette products or add any substances to them that are not intended by the manufacturer. If someone is concerned about their health after using e-cigarettes, call the local poison control center at 1-800-222-1222.

Regardless of the ongoing investigation by the health department and CDC, youth, young adults and women who are pregnant should not use e-cigarettes. Adults who do not currently use tobacco products should not start using e-cigarettes. Adult smokers who are attempting to quit should use evidence-based treatments, including counseling and Food and Drug Administration-approved medications. If someone needs help quitting tobacco products, including e-cigarettes, contact your doctor or other medical provider or call the Missouri Tobacco Quitline at 1-800-QUIT-NOW (1-800-784-8669). For information on the text-based e-cigarette quit program from Truth Initiative, visit truthinitiative.org/quitecigarettes or text “DITCHJUUL” to 88709.