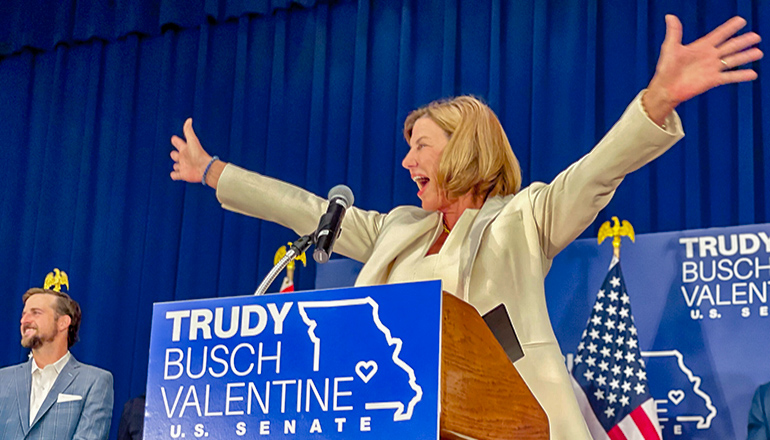 United States Democratic Senate Candidate Trudy Busch Valentine shared her background when she visited Trenton as part of an RV tour on September 9th. She introduced herself as a nurse, mother, grandmother, and fourth-generation Missourian.

She said her father, August “Gussie” Busch built the biggest brewery in the world through hard work and perseverance. She is grateful to her parents.

Busch Valentine became a candy striper at a Saint Louis hospital when she was 13. When she was 17, her eight-year-old sister was critically injured in a vehicle accident.

Busch Valentine said nurses help people in their greatest time of need, and she thinks the U. S. is in a great time of need. That is why she decided to run for the U. S. Senate.

Busch Valentine said people must come together, work together, and stop divisions in communities.

Busch Valentine later told KTTN how she plans to stop the division in politics.

During the meet and greet event in Trenton on September 9th, United States Senate Candidate Trudy Busch Valentine addressed issues she said she continues hearing about throughout Missouri.

She said she supports a woman’s freedom to make healthcare choices, including abortion and birth control and she talked about foreign countries buying Missouri farmland stating China wants to take jobs and land away.

She does not like the idea of a four-day school week in rural Missouri.

During a brief interview with KTTN, Busch Valentine spoke about more issues saying she believes in the Second Amendment.

She thinks people deserve quality and affordable healthcare. She also said she feels like the right to vote is being taken away from people, and it is being made more difficult to vote.

Busch Valentine plans to visit many places in Missouri to listen to residents and their issues.