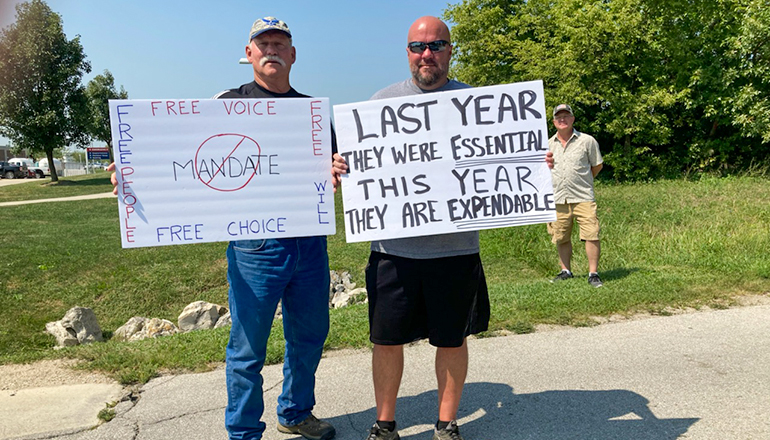 It is estimated more than 200 people attended a rally near Wright Memorial Hospital in Trenton on Tuesday, September 7, 2021, to show support for personal choice involving whether to receive a COVID-19 vaccine.

Spokesperson Nathan Rorebeck said the rally was for the vaccine mandate involving employees for the Saint Luke’s Health System, which includes Wright Memorial Hospital.  He says the rally was “excellent,” and it went as well as he hoped.

One person in attendance was Seventh District State Representative Rusty Black of Chillicothe who talked about what has been going on in Jefferson City.

The Saint Luke’s Health System set a deadline of October 30th for employees to be vaccinated. Employees can request a medical or religious exemption. Any employee granted an exemption will be required to undergo weekly COVID-19 testing and monitoring.

Rorebeck expects some area residents to attend a rally to be held in Jefferson City on September 15th to show support regarding any vaccine mandate, not just in the medical field.

Rorebeck says a group of concerned citizens who want to protect rights will meet at the 10th Street Baptist Church of Trenton on September 26th in the evening. Anyone who wants more information on the group and its events can request to be added to an email list by emailing [email protected]. He encourages groups outside of Grundy County to send an email, so the local group can network with other groups in Missouri and other states.