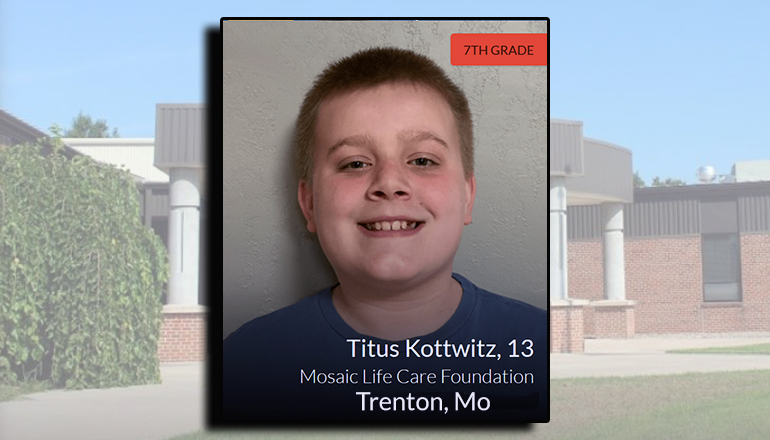 The word “volition” comes from Latin and French roots meaning “wish” or “will.” Titus Kottwitz, a seventh-grader at Trenton Middle School in northwest Missouri, got his wish when he spelled the word “volition” correctly to earn a spot in this year’s Scripps National Spelling Bee.

“I’m excited that I got this far because not a lot of people around here have,” Kottwitz tells Missourinet. “Only two before me have. So, I’m really excited about that. I would just like to see how far I can get through because I’ve never made it this far.”

Saturday is showtime for more than 200 spellers from across the nation, including Kottwitz and seven other Missouri kids. They will begin competing virtually in the bee.

According to Kottwitz, the list of national spelling bee words given to participants is quite the range.

“It can go anywhere from easy words to these foreign words you had no idea existed,” he says.

He tells Missourinet his spelling strategy.

“I like to ask for alternate pronunciations of stuff to see how people can say it to see how it could be spelled,” he says. “And then I also think of what I have seen from text and what this word kind of sounds like and how it would be worded out.”

Gott says the community has embraced Kottwitz’s move to the national spotlight.

“Our Rotary Club had him come. They invited him to lunch and they actually put on a spelling bee where Titus went up against some of our local Rotarians and handled them pretty easily. I hope he understands what an extreme honor it is to make it this far. He’s one of few representatives across the country who will be doing this. And he’s still got another year to even try after this. So, the fact is this is an amazing accomplishment and we are just extremely, extremely proud and blessed to have him as a student here at Trenton Middle School,” Gott tells Missourinet.

The quarterfinals are on June 15. The semifinals are June 27 and the in-person finals are July 8 at Walt Disney World.