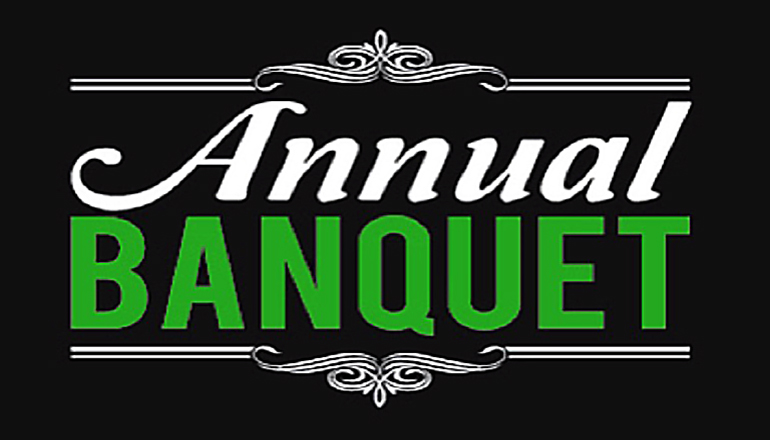 At the Trenton Area Chamber of Commerce Annual Banquet on June 4, President Debbie Carman reviewed the last year and acknowledged that plans had been made to hold the banquet in March 2020, and then COVID-19 came along.

Carman said it was a tough year, but “the show must go on.” The community rose to the challenge to keep Trenton going.

Chamber Board of Directors Chairperson Andy Cox commented there had been ups and downs, but things are going up now. However, he noted it would take a lot of work as a community working together to build back.

Chamber Ambassadors Chairperson Jeanie Griffin recognized the efforts of Ambassador Joe Brinser, who died in February. But, she said, “his dedication and love for his community was unending,” and the ambassadors wanted to do something in his memory.

Ron Dougan won the drawing for a Kansas City Royals Suite, which CFM Insurance donated. Angela Stevenson won the 50/50 drawing, and she donated her half of $326 back to the chamber. Dillon Harp won the door prize.

Two pillars of the community were recognized at the Trenton Area Chamber of Commerce Annual Banquet on June 4th. M. G. Kennedy and Dan Wilford were originally to receive the awards last year, but that banquet was canceled due to COVID-19 restrictions. It was decided they and recipients of other chamber awards from last year would be recognized this year.

M. G. Kennedy acknowledged that Trenton “had kind of a tough time in the last year.”

Kennedy encouraged everyone to volunteer with Dan Wilford, saying that he wanted to serve people years ago.

He has put into practice the mottos of the Lions and Rotary clubs, which both deal with serving others.

Wilford is goal-oriented and has accomplished many of the goals he set for himself. He encouraged others to set goals.

Wilford also encouraged people to work together to accomplish what is perceived as impossible.

Awards were also presented to two businesses of the year and an organization of the year at June 4th’s Trenton Area Chamber of Commerce Annual Banquet.

Chamber President Debbie Carman said the honorees had “gone above and beyond” for the community.

Two businesses of the year and an organization of the year were recognized at June 4th’s Trenton Area Chamber of Commerce Annual Banquet.

Vintage Vines was one of the businesses of the year, and owners Rachel and Sena Arnold accepted the award. Sena Arnold said they were shocked to get the award.

Duane Urich and Jen Hottes accepted the award for the Black Silo Winery, which was the other business of the year. Duane Urich.

The organization of the year was Elks Lodge Number 801. Exalted Ruler Harry Kately and Matt Roberts accepted the award. Matt Roberts said he is proud of what the Elks can do for the community and recognized the Scouts.

Roberts talked about the Elks using a $2,000 grant to help buy clothes, shoes, and hygiene items for the Bulldog Closet for Trenton students.

He also hopes to have a mobile dental unit back in Trenton. The unit was supposed to be used in town last year before the pandemic hit.

Last year’s banquet was canceled due to the pandemic, so the 2020 recipients were recognized on June 4th.