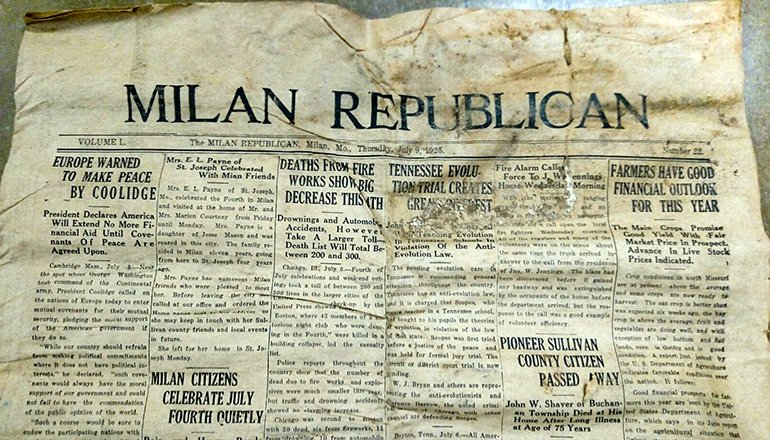 A time capsule was discovered under the cornerstone of the Milan C-2 High School building last week.

Superintendent Ben Yocom says part of the construction process at the school involved the contractor removing the cornerstone from 1925, so it would not be covered when the existing and new buildings are connected.

The time capsule was held in place with a wooden dowel and an “An array of documents” were found inside, including issues of the Milan Standard and Milan Republican from July 1925 and honor rolls, including multiple school districts, county schools, and area schools. There were also proclamations that may have been from the senior class at the time.

Yocom says an article in one of the newspapers reports the mayor at the time the cornerstone was put in place directed businesses to close and attend the event. Several thousand individuals were said to be present for the laying of the cornerstone, which Yocom said gave him “chills.” He notes it was “quite telling” to compare the circumstances at that time to now

Yocom says the documents found inside the time capsule were difficult to identify at first. Condensation and moisture had seeped in causing wear and tear on the contents. One of Yocom’s first thoughts was that the documents were “in horrible condition.”

Most of the items were inside envelopes and preserved and are now drying in a classroom.  Yocom adds that the Milan High School building has a “unique history.”

Plans are to preserve the time capsule items with Yocom looking into ways to display them, so they can be appreciated. Yocom also plans to take the cornerstone, as well as the bell on the high school, and perhaps have a student organization begin a beautification project to commemorate both.

Please, be patient as photos from the time capsule load below. There are approximately 20 very large photos, and the load time will vary depending on the speed of your internet connection.