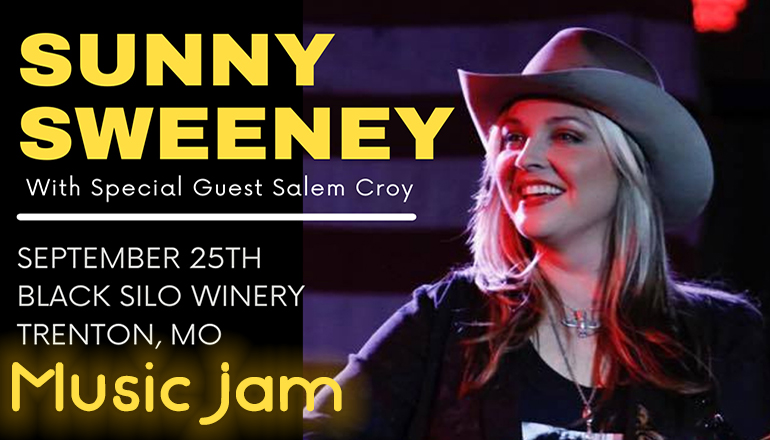 A country singer-songwriter from Austin, Texas will perform at the Leadership Northwest Music Jam at the Black Silo Winery in Trenton Saturday night, September 25, 2021.  Sunny Sweeney will be the main act at the fundraiser for Leadership Northwest Missouri with doors opening at 6 o’clock.  The opening act, Salem Croy of Trenton, will start at 8 o’clock.

Sweeney and her band will perform a 90-minute set at the concert.

One song Sweeney plans to perform is her hit “From a Table Away.”

She says show organizer Shane Lynch is a good friend, as they both lived in Nashville at the same time at one point. She explains that when Lynch asked her if she would perform at September 25th’s concert, she said “absolutely.”

She says she has not yet heard opening act Salem Croy’s music.

Sweeney has performed at benefit concerts before, and she has also played in small towns before.

She comments that she likes touring because it is the only thing she knows job-wise. She started performing music after college.

Sweeney enjoyed the first time she heard herself on the radio.

Sweeney says she always has goals to accomplish, but she likes keeping goals to herself.

The Leadership Northwest Music Jam will be one of several concerts she has scheduled for the rest of the year. Sweeney notes that she and her band have toured some since the pandemic started, but the touring is not nearly as much as normal. She wants to perform at every gig she can this year.

Tickets for the September 25 concert cost $20.0, and are available on Eventbrite. Tickets are also available on the Leadership Northwest Music Jam Facebook page. Tickets will cost $25.00 at the door.

You can watch Sunny sing “From a Table Away” in the video below.