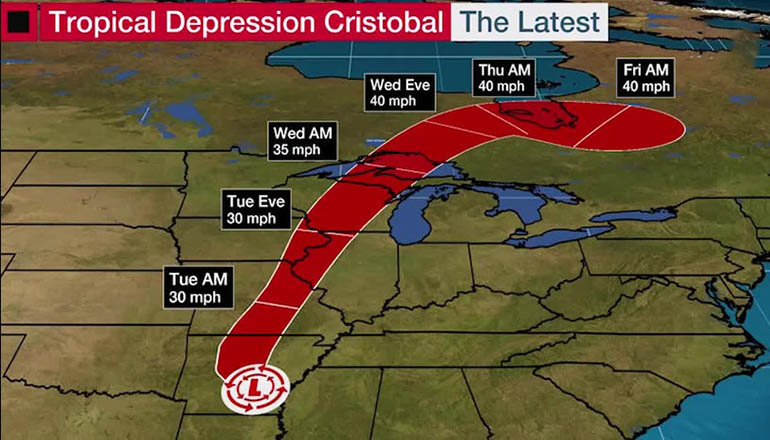 The remnants of Tropical Storm Cristobal are moving into Missouri, prompting watches.

The National Hurricane Center said in its 4 a.m. update the center of the storm is about 80 miles southeast of Springfield, Mo., and has maximum sustained winds of 30 mph.

A flash flood watch is in effect for areas in and near the length of the Mississippi Valley. Tropical Storm Cristobal was downgraded to a tropical depression early Monday. The National Weather Service in Kansas City has issued a Flash Flood Watch through Tuesday evening for north central Missouri including Carroll, Chariton, Grundy, Linn, Livingston, Macon, Mercer, Putnam, Randolph, and Sullivan counties as well as  Adair and Schuyler counties in northeast Missouri.

A meteorologist with the National Weather Service in St. Louis, Sally Johnson,  says Jefferson City, Columbia, Sedalia, and Kirksville are expected to see two to three inches of rain.

On Wednesday, a band of strong winds with gusts near 45mph will push through Wednesday from midnight until around noon western Missouri.

Below is your forecast for northern Missouri for June 9, through June 11, 2020:

Today: Showers and possibly a thunderstorm. Some of the storms could produce heavy rain. High near 80. Northeast wind 6 to 8 mph becoming west in the afternoon. The chance of precipitation is 100%. New precipitation amounts between 1 and 2 inches possible.

Tonight: A chance of showers and thunderstorms. Partly cloudy, with a low around 58. Southeast wind 5 to 13 mph becoming southwest in the evening. Winds could gust as high as 26 mph. The chance of precipitation is 40%. New precipitation amounts between a tenth and quarter of an inch, except higher amounts possible in thunderstorms.

Wednesday: A chance of showers, mainly before 1 pm. Cloudy, then gradually becoming mostly sunny, with a high near 74. West northwest wind 5 to 10 mph increasing to 13 to 18 mph in the afternoon. Winds could gust as high as 37 mph. The chance of precipitation is 50%. New precipitation amounts between a tenth and quarter of an inch possible.

Wednesday Night: Mostly clear, with a low around 56. West northwest wind 5 to 10 mph becoming light west after midnight. Winds could gust as high as 23 mph.

Thursday: Sunny, with a high near 82. Light west wind increasing to 5 to 9 mph in the morning. Winds could gust as high as 21 mph.