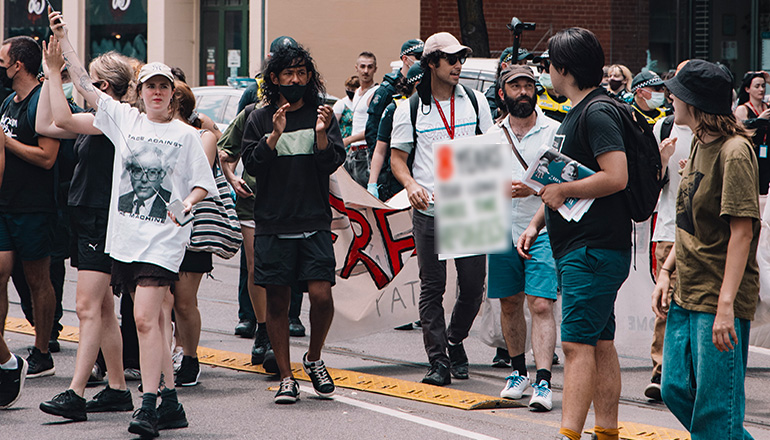 State Senator Rick Brattin, R-Harrisonville, wants to make it a Class E felony for any protester who interferes with or blocks a public road.

Drivers would not be held liable for injuring the demonstrators who block traffic. A provision in the bill says the driver is still liable if they are found to be using gross negligence or not exercising due care.  Also under his bill in a separate provision, deadly force could be used against protesters who unlawfully enter or attempt to enter private property, such as a residence or a business.

The Missouri Senate Judiciary Committee held a public hearing today on his bill.

“To think that your right to protest enables you the right to stop traffic and literally stop people’s ability to move about freely in this nation is a gross misunderstanding of our constitutional rights,” Brattin said during the Monday hearing.

“As of September 1920, over 104 demonstrators have been hit by cars – 94 of those committed by civilians, eight committed by police, 39 have been charged. In 43 of those cases, they have been coded as drivers who have committed these acts by malicious intent,” says Grey.

He said criminalizing protesters who interfere with traffic is a deliberate attack on democracy, freedom of speech, and assembly.

“I’m a product of the Civil Rights Movement,” he said. “Just last week, we honored the life of the Rev. Dr. Martin Luther King and his legacy. There are those who didn’t agree with many of his methods of protest, but it was those same methods that changed this country for the better. Those same methods that you seek to criminalize are the same methods that helped to destroy Jim Crow laws, segregation, and destroyed centuries of hatred and bigotry.”

Grey went on to say the measure would vilify non-violent protesters – not the drivers.

“For God’s sake, authorizing the use of deadly force by non-law enforcement people is creating a recipe for disaster by giving permission to commit bodily harm or even taking a life,” said Grey. “We believe that human life is more sacred than property.”

Sharon Jones of the Missouri State Conference of the NAACP, who testified against the bill, said the legislation goes too far.

“We really are crossing that line to a point of suppressing free speech, as opposed to just controlling the time and manner of it,” said Jones.

The committee has not voted yet on the measure. The legislation is Senate Bill 66.

Photo by Pat Whelen on Unsplash