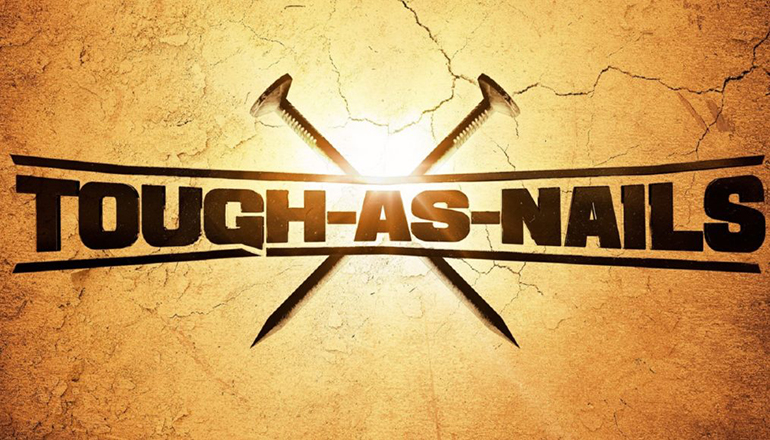 Two Missourians are on the first season of the CBS television show Tough As Nails. U.S. Marine Corps veteran Kelly Murphy of west-central Missouri’s Warrensburg and St. Louis roofer Lee Marshall are on the show that has allowed them to earn cash by using their bare hands. The show, centering around blue-collar challenges, is an inspiring display of strength, precision, team-building skills, grit, determination, and mental toughness.

Other skilled men and women on the show include a welder, drywaller, scaffolder, flight gate agent, firefighters, farmer, and deputy sheriff jailer. The challenges are also about strategy and working smarter not harder at real-world job sites. Participants have worked to build a farm fence, railroad track, lay bricks, pull a caboose, shovel coal, set up an irrigation system in a farm field, among other things.

Murphy, otherwise known as Murph, became a cast member after catching the attention of someone from the Discovery Channel. The individual saw videos on Murphy’s Instagram account showcasing his different physical fitness activities and reached out about one year ago to encourage Murphy to apply for the show. Murphy thought it was a joke at first but soon after found out that it was the real deal.

“It’s not very often you get an opportunity to do something like this and I never want to go through life passing up an opportunity,” he says. “You only get so many checks in the box of life and I didn’t want to pass this one up.”

Two teams of six compete on the show for a $60,000 team prize. Murphy is with Savage Crew and Marshall is with Dirty Hands. During last week’s episode, Dirty Hands clinched the team prize in a tiebreaker challenge.

Murphy, 48, served 22 years as a Marine. He stands about 6’4 tall and towers over many of the other competitors. He has led soldiers on deployments with three members to as many as 210. He has been deployed to the Persian Gulf, Australia, and southeastern Asia.

The military is made up of many blue-collar jobs, which Murphy says members jokingly call “green-collar” jobs. He held a variety of positions throughout his career, including in avionics, as an instructor and later a recruiter, in the infantry, military police, and motor transport.

Murphy was stationed at Fort Leonard Wood in southern Missouri in 2010. He retired about eight years ago to watch his four kids grow up. He is now the Director of the Military and Veterans Center at the University of Central Missouri in Warrensburg. The center is a one-stop-shop for veterans and their family members going to UCM. Murphy is sometimes seen on the show sporting a UCM t-shirt.

He says his toughest challenge came two weeks ago while tackling his fear of heights he developed later in life.

“When I repelled, I proved to myself that I still have what it takes,” he says. “And I think that’s why this past episode is one of my favorites. When I watched

it again on Wednesday, I actually cried at the house because it was like ‘Wow I did overcome that,’ because it’s the first time you get to see yourself. I knew what I was feeling but then when I watched it, it was very powerful for me. That was a huge day for me. It will probably always be my favorite part of the show.”

Thanks to the show, he says he would give skydiving a shot and would not hesitate to repel again.

“It would be a little bit different because it would just be for leisure – it wouldn’t be under the pressure of competing for $200,000,” he says.

The show teaches viewers that America’s toughest come in all sizes and backgrounds. Murphy says Tough As Nails reinforced what he already knew – don’t judge a book by its cover.

Although filming ended in mid-February, he says Savage Crew remains strong and members talk to each other on a regular basis. They went through growing pains, in the beginning, to learn each other’s strengths, weaknesses, and overcome communication problems. They fought back from a 4-1 deficit to force a tiebreaker in the final team challenge.

A restaurant in Warrensburg called Fitters is holding a watch party this Wednesday for the season finale at 8 p.m. Murphy will be there showcasing some of his favorite gear from the show, including a personal trophy – the piece of log he sawed off to defeat his Missouri counterpart, Marshall, in the team competition. During a rematch, Marshall claimed victory to win his team the grand prize.

The show, created by Phil Keoghan, has captured the number one spot in ratings several times and has averaged about four million viewers each week. It has scored a second season with CBS.

Hear the full interview with Murphy: