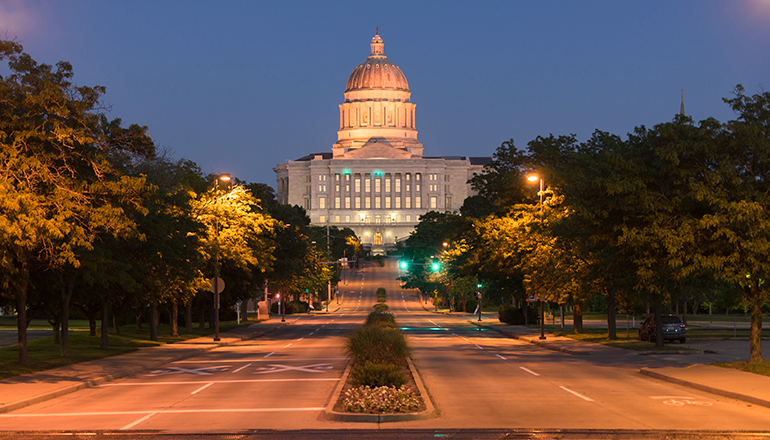 Another session of the Missouri Legislature has come and gone. Of the 1,559 House bills and 689 Senate bills filed this time around, 69 bills will make it to Gov. Mike Parson’s desk.

Here are some key bills left up to the governor to sign or veto:

Missouri lawmakers vote to pump up the state’s gas tax

The Missouri Legislature has passed a proposal that would boost the state’s gas tax for the first time in about 25 years. The plan would raise the user fee by 12.5 total cents over five years. It would also let most drivers choose whether they want a rebate for the amount of the increase. Another provision would increase annual fees on electric vehicles by 20% per year over a five-year period. The legislation would also create a task force to study the impact electric vehicles have on the state’s transportation funding.

Senate Bill 262, sponsored by Senate President Dave Schatz, R-Sullivan, is projected to raise about $500 million annually to help fund Missouri’s roads and bridges. If the bill is fully phased in, the average passenger car traveling 12,000 miles annually would pay about an extra $70 per year. For pickups, the average increase would be less than $100 annually.

An effort to fight child abuse within Missouri’s religious boarding schools has cleared the state Legislature. Countless former students at some of these places have reported being beaten, raped, starved, restrained, and isolated long-term.

The legislation would require safety inspections, background checks for employees and the schools must notify the state of their existence. It also requires adequate food, medical care, and clothing for students, and the parents must be allowed to visit their children at any time without notice. Reps. Rudy Veit, R-Wardsville, and Keri Ingle, D-Lee’s Summit, have led the effort on House Bill 557.

Sen. Elaine Gannon, R-De Soto, is proposing to let domestic violence victims get long-term orders of protection against their alleged abusers without returning to court annually. Senate Bill 71 would allow protection orders to be renewed for up to the lifetime of the alleged abuser. It also includes a provision that would require the attackers to stay away from any animals the victims own. The lifetime protection order provision was successfully attached by Rep. Lane Roberts, R-Joplin.

The state Legislature has passed two versions of a controversial school choice effort. Both would let donors provide scholarships to students to attend a private Missouri K-12 school. In return, the donors would get state tax credits. The measures would also allow parents to use the scholarships for things like tutoring, school supplies, books, and other educational expenses.

On this final day of the session, the Legislature passed a scaled-back version that would cap the tax credits at $25 million for the first year and $50 million with inflation. Christofanelli attached this version to Senate Bill 86, sponsored by Sen. Dan Hegeman, R-Cosby.

Gov. Mike Parson has already signed a duo of bills that aim to get more kids adopted and increase financial help to foster parents. Rep. Hannah Kelly, R-Mountain Grove, is sponsoring HB 429 and HB 430. One bill allows parents who foster for at least six months to deduct up to $2,500 for a single parent or $5,000 for a married couple. The other bill would give a one-time tax credit of up to $10,000 for each child adopted. Tax credit priority would be given to parents adopting children with special needs.

Senate Bill 153 and 97 would make out-of-state companies tax Missouri residents for buying from them online. Supporters say it would put those businesses on a level playing field with brick-and-mortar stores in Missouri. The proposals would include income tax cuts to help offset the projected sales tax revenue increase. Sen. Andrew Koenig, R-Manchester, and Rep. J. Eggleston, R-Maysville, worked together to pass the bills.

In the final minutes of the session, the Missouri Legislature has passed a bill designed to protect some businesses and other organizations from COVID-19 liability lawsuits. The measure would shield businesses like health care providers, schools, manufacturers, and churches, from such lawsuits in many instances. Senate Bill 51 is sponsored by Sen. Tony Luetkemeyer, R-Parkville.

Several public safety bills were offered this session. Senate Bills 53 and 60 were lumped together and will ultimately make it to the governor. Several provisions are in the package, including ones that would ban most police chokeholds and remove a requirement for Kansas City police to live within city limits. It includes provisions about stalking, pay raises for sheriffs and would require law enforcement to keep a database of incidents involving officers using serious or deadly force. Under the legislation, a person could also be prosecuted if they post personal information online about law enforcement, corrections or parole officer, a prosecutor, or their immediate families, with the intent to harm them. The bills were sponsored by Sens. Tony Luetkemeyer, R-Parkville, and Brian Williams, D-St. Louis County.

Another public safety package passed by the Legislature on this final day is Senate Bill 26. It would strengthen protections for officers under investigation for inappropriate behavior. It could also penalize Missouri cities that cut police budgets. Another piece would take away parole from any offenders who commit a violent crime against a law enforcement officer and penalizes another that would vandalize public monuments.
A contentious piece was removed from the bill – one that would have penalized protesters for blocking a roadway. The legislation is sponsored by Sen. Bill Eigel, R-Weldon Spring.

Missouri’s college athletes could profit from their stardom without fear of losing their scholarships. The Missouri Legislature has sent to the governor a higher education bill that would allow them to make money off their name, image, and likeness through endorsement deals, for instance. Representative Nick Schroer, R-O’Fallon, added the provision.

The legislation, sponsored by Representative Wayne Wallingford, R- Cape Girardeau, would also remove a limit on how much Missouri’s colleges and universities can increase tuition by.

After years of attempts, the Missouri Legislature has passed a bill that would create a statewide prescription drug monitoring system. The electronic database collects information about controlled substance prescriptions – to monitor potential cases of drug misuse. The effort, sponsored by Sen. Holly Rehder, R-Scott City, has been her priority for the past nine years.

Rep. Derek Grier, R-Chesterfield, is proposing to let military spouses and work in Missouri without going through the state’s licensing hoops. Gov. Mike Parson called for license reciprocity for military spouses during his State of the State address in January.

Sen. Greg Razer, D-Kansas City, successfully added a provision that would allow pharmacists to provide medication without a prescription to a customer after potential exposure to HIV. If the drug is taken soon after exposure, it can prevent a person from being infected with the virus. Under the bill, pharmacists would be required to have a licensed doctor come up with a process to dispense the drugs. Grier’s proposal is House Bill 476.

The package for the fiscal year beginning in July includes:

*$80 million for Missouri’s public colleges and universities – a roughly $24 million increase, including a 3.7% boost in aid for the state’s four-year universities

*$9.2 million in Capitol repairs, including carpet replacement in the House and Senate chambers

The budget does not include funding to expand Medicaid healthcare coverage to another 275,000 low-income Missouri adults. The expansion effort was passed by voters last August.

Here are some of the top bills that died this session:

In a rare move, the Missouri Senate adjourned the legislative session several hours early today without tying up some loose ends. Senate Democrats blocked business on the floor today and say some members of Senate Republican leadership have been full of “broken promises” this session. A special session or two could be in the works to get some unfinished business done, including a healthcare tax renewal that helps to fund about $2 billion of the state’s Medicaid healthcare program. Senate Bill 29, sponsored by Sen. Dan Hegeman, R-Cosby, is often left until the very last part of the session as a point of negotiation on other priorities.

The Missouri Senate spent several hours on a controversial K-12 education plan, but ultimately the legislation did not make it out of the chamber. Sen. Cindy O’Laughlin, R-Shelbina, sponsored the package that would have expanded charter schools statewide, allowed tax credits for private school scholarships, and set up a process for school board members to be recalled. A provision sponsored by O’Laughlin would have stripped a district of state aid if the district bans a home school student from participating in activities or requires the student to attend the school to participate.

The Grain Belt Express project plans to run wind power transmission lines across eight rural counties in northern Missouri—from Buchanan through Ralls. Disagreement over the power line project pits farmers on the transmission route in the northern part of the state against county commissioners in the south, who expect the project to share electricity at lower rates.

Though the Public Service Commission has approved the plan and the commission’s approval won a court challenge, agricultural opponents have been pushing back through the legislative process the past few years. Sen. Jason Bean, R-Holcomb, and Rep. Mike Haffner, R-Pleasant Hill, sponsored bills this session that would have stopped utility company Invenergy from using its PSC-granted eminent domain power to build the lines.