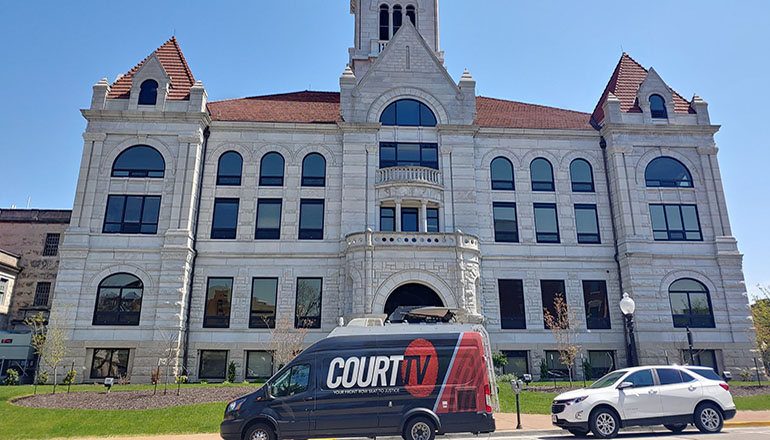 Addie and the victim, Molly Watson, both worked at the Moberly Correctional Center. The case has been moved from northeast Missouri’s Monroe County to Jefferson City, on a change of venue.

The jury has been selected from Cole County, and Cole County Circuit Judge Jon Beetem is presiding at the trial. The Cole County Courthouse is just a few blocks from the Missouri Capitol.

Addie is charged with first-degree murder for killing Watson. Prosecutors say he killed his fiance to hide his affair from his wife of 22 years.

“And the planning of the April 2018 wedding to Molly Watson set those two lives on a collision course,” Dolin tells the jury.

Dolin says Watson’s body was discovered on a dusty road in rural Monroe County. She had been shot once at contact range in the back of the head, according to Dolin. Watson was wearing her engagement ring.

Dolin is asking the jury to listen carefully to the evidence, adding that the right rear tire of Addie’s care was identified as a perfect tire print found feet from Watson’s body.

Defense attorney T.J. Kirsch of Jefferson City made his opening statements Monday as well. He tells the jury that Monroe County law enforcement officers jumped to conclusions because of the affair.

“The evidence will show that the state does not have proof beyond a reasonable doubt in this case,” Kirsch tells the jury.

Kirsch says Addie had an affair with someone he loved. He says the evidence will show that because Addie had that affair, law enforcement jumped to a conclusion before knowing how Watson died.

Counselor Kirsch says the evidence will show that Addie cooperated, by speaking with investigators, volunteering the cell phone and admitting to the affair. Kirsch also says Addie consented to searches.

Kirsch says “the state’s case makes no sense.” He says that the wedding planning was continuing, and that on April 27, 2018, Addie paid $4,000 of the remaining balance of the wedding and dropped decorations off.

Kirsch also criticizes Dolin’s statement about the tire impression, saying there are no scientific standards for that. He finished his opening statement by saying that at the end of this case, he’s confident the jury will find Addie not guilty.

The trial is expected to take all week. Court TV’s live coverage will continue on Tuesday morning.