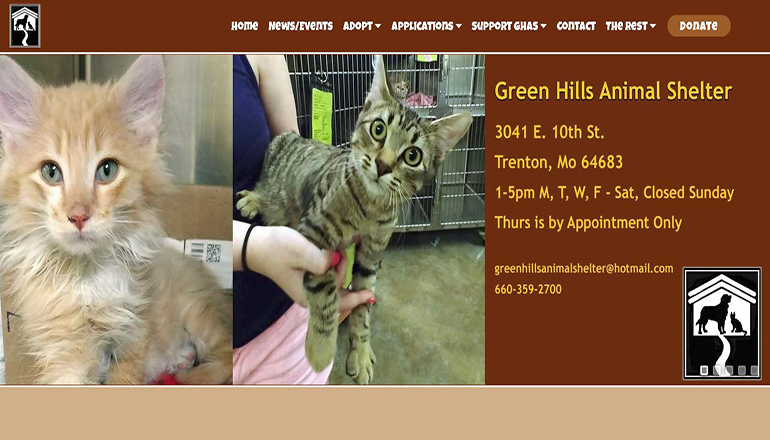 The Green Hills Animal Shelter houses dogs and cats to be adopted.  Manager Ronda Michael says the shelter tries to keep about 25 dogs at a time.

Ronda Michael notes anyone wanting to adopt a pet can come to the shelter at 3041 East 10th Street in Trenton.

Information about available animals is also on the shelter’s website.  Board Member Tim Michael explains the shelter used to house 50 or more dogs at a time, but the quality of care they got was not what the shelter liked. He notes the expense of housing that many animals was also hard to deal with.

The adoption fee for dogs is $120, puppies $140, and cats $80. The fees include being spayed or neutered and vaccinations. The shelter sometimes has a special promotion for the adoption of cats, which is put on Facebook.

Ronda Michael says the shelter can always use donations of toys for the animals. Food is also accepted.

The Green Hills Animal Shelter is partnering with the Mid-America Music Festival and will get part of the proceeds from the event at the Black Silo Winery of Trenton on July 16th and 17th.

Shelter Board Member Tim Michael says representatives of the non-profit organization will be volunteering at the event.

Volunteers will also be involved with the sale of raffle tickets and are soliciting sponsors for the event until July 9th.

The Green Hills Animal Shelter is looking for more individuals to volunteer on its behalf at the Mid-America Music Festival.

The shelter usually holds other fundraisers throughout the year.  Money for Mutts was held over Memorial Day weekend and included volunteers at street intersections in Trenton. Michael says the fundraiser “went really well,” and more than $5,000 was raised.

Michael calls last year a “rough year” for the animal shelter because it could not have many of its typical fundraisers due to COVID-19 concerns. The annual chili and chocolate contests were not held. However, Barktoberfest was held.

The Green Hills Animal Shelter has made improvements to its building in Trenton in the last few years.  Shelter Board Member Tim Michael says one of the most recent improvements was a new roof because the old one was leaking. The shelter also replaced fluorescent lights with LED lights, which has helped the shelter save money and cut expenses.  He comments there are always projects to work on.

Manager Ronda Michael says the shelter can always use more volunteers to do various tasks.

Volunteers younger than 13 years old should be accompanied by an adult.

Ronda Michael says anyone wanting to volunteer can come to the animal shelter at 3041 East 10th Street in Trenton to fill out an application.