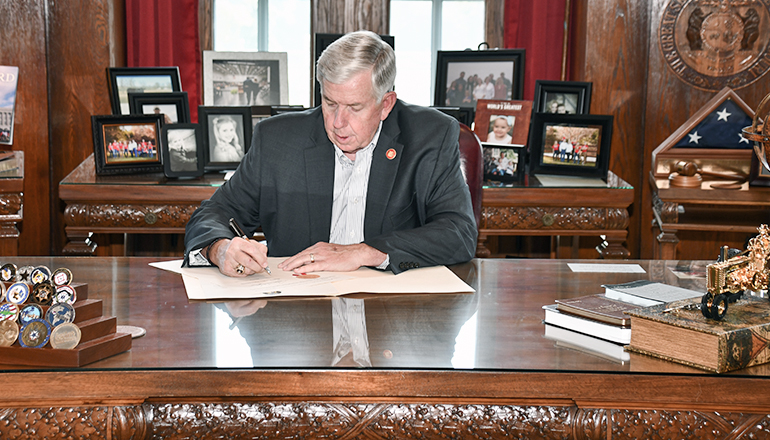 Governor Mike Parson signed a bill at the North Central Missouri College Barton Farm College of Trenton June 10th to prevent third parties from inspecting certain agriculture production facilities. House Bill 574 limits agriculture inspection authority to only those with statutory and regulatory reason to do so.

Prior to signing House Bill 574, Parson stated he wants to protect agriculture in Missouri because some people want to destroy agriculture. He also said it was great to speak on a college campus.

Parson commented that in the 1950s, 50% of Missouri residents did farm-related work. Less than two percent do today. That is why he was signing House Bill 574.

Parson noted that Missouri is in the top 10 of almost every agriculture product in the country, including cattle, pork, poultry, wheat, corn, soybean, rice, and cotton.

Hegeman said Parson understands the need for infrastructure, whether that was water, wastewater, or broadband.

Bill sponsor 43rd District State Representative Kent Haden commented House Bill 574 was “very important” to Missouri livestock and agriculture, as it protects facilities from inspection by people who do not have a reason to be there.

Earlier in the day, Parson signed Senate Resolution 7 in Milan to express support for state funds for the East Locust Creek Reservoir project in Sullivan County.