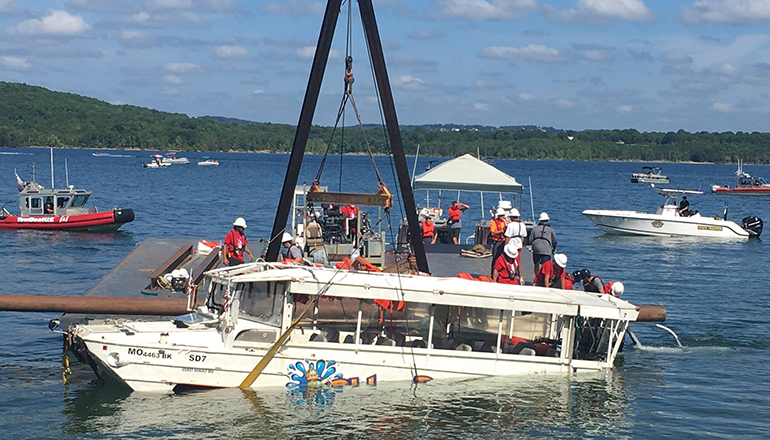 The Ride the Ducks boat that sank last Thursday on Table Rock Lake near Branson, killing 17 people, has been brought above water.  Scott Stroermer with the Coast Guard says crews attached a rig sling system to the Duck Boat to hoist it upward.

KOLR-TV reports the vehicle was then raised to the surface at about 11 this morning.  The boat will now go under an extensive examination by the National Transportation Safety Board, which will determine whether safety protocol was observed by the attraction operator, Ripley’s Entertainment.

A former National Transportation Safety Board chairman is calling for the permanent ban of duck boats as amusement rides.

Jim Hall, who served as NTSB chairman from 1993 to 2001, told KMBC-TV Sunday that because there is no effective oversight of their operations, the boats should be banned. He told the TV station that the U.S. Coast Guard or Congress should act to ban the vessels immediately.  Hall was the NTSB chairman in 1999 when the Miss Majestic duck boat sank on Lake Hamilton near Hot Springs, Arkansas. 13 of the 21 people aboard that boat died in the mishap.

The Branson Ride the Ducks website currently has a gray banner running across the top with a statement saying it’s offering to pay for medical and funeral expenses as well as travel and accommodations for families impacted by the tragedy. It also specifies that the company is fully cooperating with the NTSB, the Highway Patrol and all federal and state authorities involved in the investigation. Missouri Attorney General Josh Hawley had urged the company to comply with the highway patrol probe Saturday.