U.S. Senator Josh Hawley, R-Missouri, has a new publisher for his upcoming book. Conservative publishing company Regnery has announced on Twitter today that Hawley’s book, “The Tyranny of Big Tech” will come out in the spring.

Simon & Schuster publishing company dropped its agreement with Hawley after Trump rioters tore through the U.S. Capitol on January 6, killing five people and vandalizing the place. Hawley, who has been largely silent since the attack, accused the publisher of “assaulting” his First Amendment rights, which only applies to the government – not to private companies. 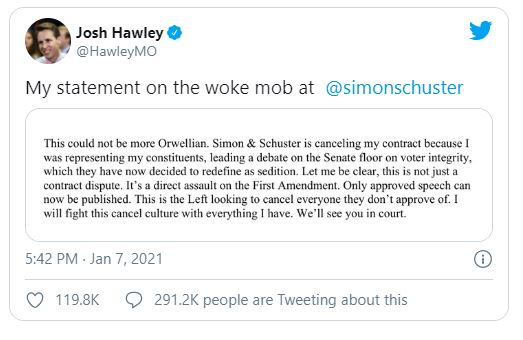 Hawley led an effort to challenge the certification of President-elect Joe Biden’s election victory. He cited voter fraud allegations that several courts have struck down.

Since the attack, Hawley has lost some key supporters, including Missouri megadonors David Humphreys of Joplin and Sam Fox of St. Louis. At the same time, he has plenty of people still on his side.

Over the weekend, Loews Hotels announced it would not be hosting Hawley’s fundraiser next month in Florida:

“We are horrified and opposed to the events at the Capitol and all who supported and incited the actions. In light of those events and for the safety of our guests and team members, we have informed the host of the Feb. fundraiser that it will no longer be held at Loews Hotels,” the statement says.

In the book, Hawley argues that big tech companies like Facebook, Google, Amazon, and Apple wield enormous market power and regulate and influence the news. Hawley says they organize, manipulate, and direct the conversations that Americans are having. He has been focusing on the work of big tech companies since his short time as Missouri Attorney General.