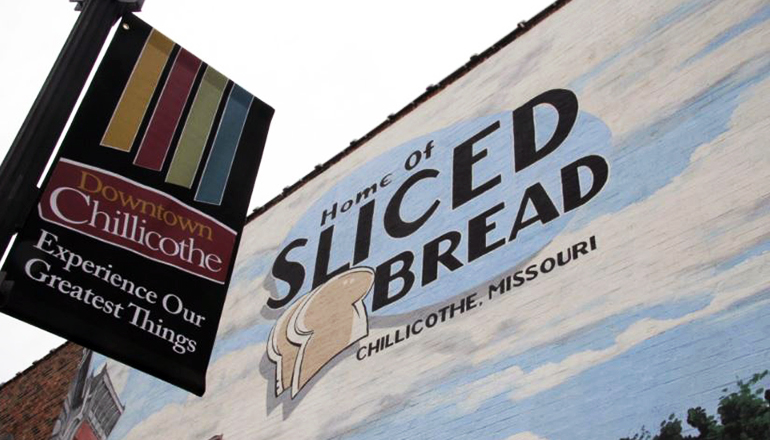 (Missourinet) – On July 7, 1928, the Chillicothe Baking Company in northwest Missouri became the first commercial bakery in recorded history to have bread mechanically cut into uniform slices. The invention, developed by Otto Rohwedder of Iowa, revolutionized the baking world.

To celebrate the 90-year milestone, the town of Chillicothe is gearing up for its first annual Missouri Sliced Bread Day on Saturday. The cost to slice a loaf of bread back then is unknown but the machine’s popularity grew instantly. Pamela Klingerman, the curator of the Grand River Historical Society Museum in Chillicothe, says Rohwedder was friends with Frank Bench. Bench’s family owned the bakery. Bench, who worked in the bakery part-time to save money for college, did the honors that day in 1928 by firing up the bread slicer for use.

“After Frank Bench used it for the first time, his bread sales went up 2000% in two weeks,” she says. “Bakers from Kansas City, St. Joseph and Marceline, they were coming from everywhere with trucks of bread to have it sliced.”

About two months ago, a 106-year-old woman visited the museum in Chillicothe to see the bread slicer. She recalls her family putting on their dress clothes and going to watch bread being sliced at a store in South Bend. The woman was about 11 years old at the time.  “Can you imagine getting dressed up just to go watch a machine slice bread? That’s the kind of impact it had on society at the time,” she says.

Klingergman says the machine’s purpose impacted the way of life for many, including as a huge labor-saving device for housewives.

“Without this invention, we would probably still be sawing bread up and not particularly thin slices,” Klingerman says. “Before everybody baked at home or if they did go and get bakery bread, it was unsliced. Mom sliced it at home and maybe not really uniformed sliced. It was a lot of work preparing for like breakfast with toast. If you had a large family, sandwiches for lunch. Then bread for supper. It helped the farmer as well because of butter production, jams, jellies, spreads and honey, that kind of thing.”

“Prior to this, the pop-up toaster had been invented but it didn’t go anywhere because people couldn’t, for the most part, make bread slices uniform to put in it. So, they got jammed up or they went in and got burned because the slices were too thin,” she says.

Bread lovers ready to binge their way to carb heaven can take it all in on Saturday. The activities you might expect to see at a festival all about bread will be there, including a French toast breakfast, bread baking contest, bread tasting, “The Greatest Parade Since Sliced Bread” and the Sliced Bread Jam Bluegrass festival. Other features of the day include a flea market, 5K run, open mic competition, historic preservation workshop and the largest fireworks display in northwest Missouri.

“I think it’s just a time for the community to come together and it’s a good day to remember,” she says. “It gives us community pride. That’s never a bad thing.”

The Smithsonian Museum has loaned the original bread slicer to Klingerman’s museum. The machine weighs in at more than 1,000 pounds.

State Rep. Rusty Black, R-Chillicothe will judge Saturday’s bread baking contest. Prizes being awarded for the top honors will be riding on the taste buds of Black.

About ten local groups are teaming up to put on tomorrow’s Missouri Sliced Bread Day events in the community of 21,000. Klingerman thinks they will have plenty of bread to go around.