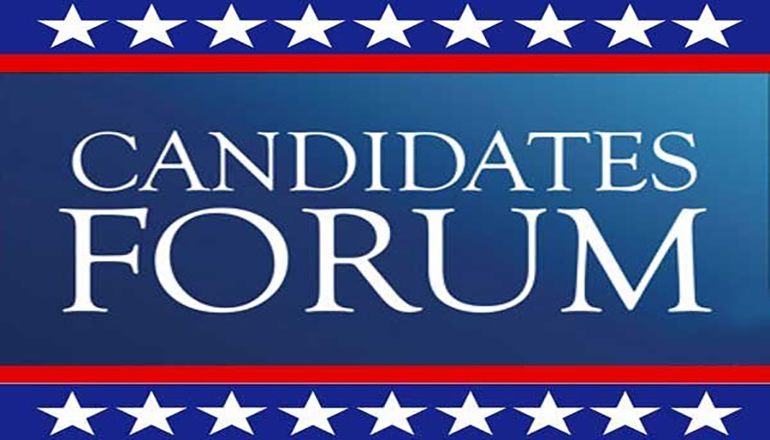 Three candidates for the Trenton R-9 Board of Education participated in a forum in the Rissler Elementary School Library on March 30th. Incumbent Dorothy Taul, Toby Havens, and Jeff Spencer are running for two three-year terms. The forum was relocated after the evacuation of Trenton High School, where the event was originally to be held.

The candidates first introduced themselves.

Dorothy Taul said she was a retired teacher and worked in mental health with students who were angry and aggressive. She substitute teaches in Jamesport since she said she cannot in Trenton because she is retired and on the school board in Trenton. She has grandchildren in the Trenton district.

Taul commented she believes education is the key to a lot of things in life.

Taul said the district could improve upon some things. She would like to see new and different classes instead of the regular classes for electives.

Toby Havens said he was an alumnus of THS and North Central Missouri College. He went to the University of Kansas and has a bachelor’s in Japanese. He studied East Asian culture. He has two daughters in the Trenton district.

Havens said Trenton R-9 has the potential to be a great district that can produce functional adults and adults who compete at a national and international level.

Jeff Spencer said he was born and raised in Trenton. He is an alumnus of THS and NCMC. He graduated from the University of Missouri—Columbia Law Enforcement Training Institute and has a background in law enforcement and state park management. He noted he specializes in school safety and shootings. He has five children.

Spencer said several community members asked him to run for the school board.

Spencer added he believes he will bring a common-sense approach if he gets elected to the school board.

The three candidates in attendance went on to answer questions posed by Moderator Mindy Walker, who is the Member Service Coordinator for the Northwest Region of the Missouri State Teachers Association.

One question asked was “What do you see as major issues facing the district, and what will be your priorities once in office?”

Candidate Toby Havens said there was extracurricular concern about things that cloud education, like violent actors.

Havens said there were parental concerns about what is taught in school, like Critical Race Theory and the 1619 Project. The board represents the community, and he wants to make sure students are getting accurate information.

Candidate Jeff Spencer said one thing that was an issue for the district is teacher retention.

Spencer said there are probably discipline problems. He comes from law enforcement and commented he knows some teachers are assaulted every day. He noted it has to be figured out how to get control of some of the students. He believes school resource officers are needed, and that is a priority for him.

Candidate and Incumbent Dorothy Taul said there are several issues that are across the country and not just in Trenton R-9, like problems with teacher retention and a bus driver shortage. She does not think people become teachers because they make a lot of money.

Taul said she thinks principals should make teachers feel appreciated. She feels the three principals hired at Trenton are good and doing their jobs the best they can.

She noted the district could do better with public relations. She mentioned some districts have a PR committee.

The next question was “When making decisions for the district, who do you see as stakeholders, and how will you make sure they have a voice?”

Spencer said parents of students and voters in the district paying taxes are stakeholders. He has an open-door policy.

Taul said the stakeholders are citizens, patrons, and taxpayers. People can text, email, or call.

Havens said teachers, staff, and parents each give a viewpoint or starting point from which issues in the district are approached.

March 30th’s Trenton R-9 Board of Education candidate forum was co-sponsored by the Trenton Teachers Association and Trenton Republican-Times.

One question posed to Trenton R-9 Board of Education candidates at a forum March 30th was “Where do you stand on the teaching of Critical Race Theory and the 1619 Project?”

Candidate and Incumbent Dorothy Taul said those things are not in the learning standards for Missouri.

Candidate Toby Havens said he had heard certain things have circulated through Trenton R-9 that relate to Critical Race Theory and the 1619 Project.

Havens added he has no problem with people of different origins. However, he does have a problem with an agenda that changes children’s worldview in an adverse way.

Candidate Jeff Spencer said Critical Race Theory and the 1619 Project are why he is running for the school board. He is in favor of the curriculum set forth by the Department of Elementary and Secondary Education and believes it should be the only thing taught in classrooms.

Another question asked at the forum was “What are your thoughts about security cameras in classrooms?”

Havens said he has a law enforcement background, and when he was a police officer, he did not have a body camera for a while.

Havens went on to say that, to fully answer the question, he needed to know where the need or want came from for cameras in classrooms. He commented it could not be good if the cameras were used to micromanage and added pressure.

Spencer said he wears a body camera every day with being in law enforcement. He agreed with Havens and wondered why cameras would be in classrooms.

Taul said she thought the question came from parents who want to know what a teacher is doing in a classroom or maybe want to get rid of a teacher. She stated she would be against cameras in classrooms.

Havens, Spencer, and Taul are three of the four candidates running for two three-year terms on the Trenton Board of Education. Joshua Shuler is also running for a three-year term, and Incumbent Jason Hostetler filed for a one-year unexpired term. Shuler and Hostetler were unable to attend the forum March 30th.

Nick McHargue asked about the candidates’ business backgrounds. He also wondered how they felt about handling facilities for the district and dealing with money.

Candidate and Incumbent Dorothy Taul said staff takes care of that and reports to the board.

Taul noted the board approves items after hearing reports. She studies reports before meetings, and if she has questions, she contacts people.

Candidate Toby Havens said he has passed federal finance testing, but that does not make him a finance guru.

Candidate Jeff Spencer said he has experience with financial budgeting in the past as a state park manager.

Steve Hamilton asked about what would happen if the state sent down a curriculum that went against the values of the community. Would the board implement the curriculum or face consequences?

Taul said the matter would come to the board, and the board would discuss it.

Spencer said he would defend the taxpayers he represents.

Havens said he dealt with something similar when there were mask mandates. He explained some people said his rights did not matter as a parent, and he did not like that.

Joy Bettis added to the question about curriculum. She asked if the board was prepared to lose state funding if it fought for the community’s beliefs. Moderator Mindy Walker with the Missouri State Teachers Association wondered how the board would prepare to keep doors open without state funding and gave an example involving wearing masks.

Spencer said he believed it could happen. He thinks the district would find a way to keep doors open.

Havens called it “a scary thought” and said it came down to money.

Ronda Lickteig asked how the candidates find out what people want.

Havens said he will reach out.

Taul said she asks questions, too.

Spencer said people will talk to him while he is out in the community.

We have audio of the entire event that you can listen to at the link below.  The audio runs slightly over one hour in length.