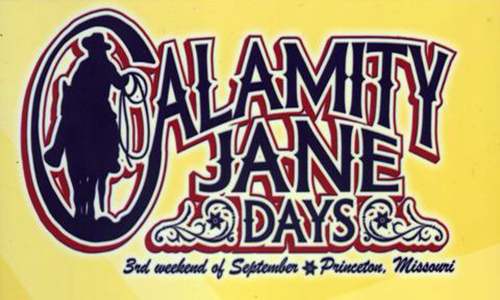 Christian Church Pastor Gary Watkins will pray at the bandstand at 1 o’clock before the parade. Felisha Bertrand will then sing the National Anthem.

The parade will follow. Cool notes clydesdales owned by the Hershberger family of Milan will be in the parade.

Area high school bands will perform at the bandstand after the parade.

Musicians will perform throughout the day. One musical group is Tres Aztlan from Kansas City, which will perform from 5 to 7 o’clock. Cool says the six-man band performs Latin music.

Cool says Chainsaw Artist Steven Higgins will be there September 17th, and the art he creates will be auctioned at the bandstand at 4:40.

Other activities planned for September 17th include the Wine Walk and Craft Beer Festival from 6 to 8 o’clock.

A car show will be held as part of Calamity Jane Days in Princeton September 18th.

Registration for the car show will be on the square from 9 o’clock to noon.

Spokesperson Mike Homedale says cars will be in place by noon. The public can view the entries from noon to 3:30.

Owner judging will go from noon to 1 o’clock. Awards will be presented at 3:30.

Homedale reports first and second place plaques will be awarded in multiple categories.

The entry fee is $10, and that can cover multiple entries.

Richie Lee and the Fabulous 50s from Des Moines will perform on the bandstand from 1:30 to 3 o’clock September 18th. Other activities scheduled for that day include the Calamity Jane Open at 9 o’clock, the Green Hills Horse Show at 11 o’clock, a shoot out at 1 o’clock, and the melodrama at 1:30.

Calamity Jane Days will be held this weekend in Princeton. The annual event will start with a tractor cruise September 16th.

Participants will meet at the Mercer County Fair Barn at 7:30 to register. Coffee and donuts will be available.

Spokesperson Dwayne Place says a short meeting for drivers will be at 9 o’clock. Tractors will leave the fairgrounds about 9:15 to start on their 31-mile ride.

Place says the tractors will arrive at the Princeton Square at 4:30.

There is a $40 entry fee per tractor for the cruise, and that includes the meal. Place notes someone can have a rider on the tractor with an approved safety seat. There is a $10 charge for an extra rider.

Princeton Chamber of Commerce President Amy Cool mentions smoked meatballs will be served for the meal.

Live music will be provided until about 9:30. It will include the band High Strung and folk music arranged by the Mercer County Library.