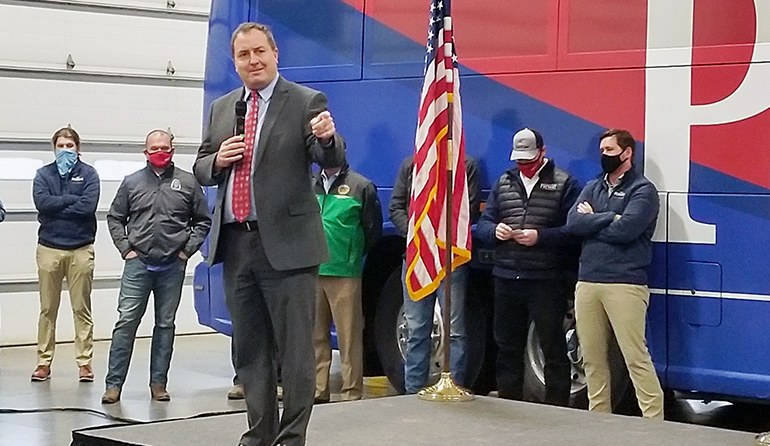 (Missouri Independent) – Republicans in the Missouri Senate should move to shut off debate if a filibuster blocks anti-abortion lawmakers from putting their stamp on provider taxes that fund Medicaid, Secretary of State Jay Ashcroft said in an interview with The Independent this week.

The advice was not, however, well received by the Senate’s Republican or Democratic leaders.

Lawmakers, who adjourned their annual session Friday, must return to Jefferson City sometime before Sept. 30 to extend a set of taxes on medical providers. Failure to do so would leave the state budget severely out of balance, with a shortage of more than $2 billion for the state’s share of the $12 billion program.

Renewal of the taxes failed for the first time in 30 years when it became entangled in abortion politics. Sen. Paul Wieland, R-Imperial, sought language to bar Medicaid from paying for certain types of contraceptives, and Sen. Bob Onder, R-Lake St. Louis, wanted a provision prohibiting Planned Parenthood from being a Medicaid provider.

“PQ” is jargon for the parliamentary motion called the previous question. If a written form is signed by five Senators and approved by a majority of the chamber, a PQ forces an immediate vote on whatever is being debated — effectively killing a filibuster.

While it is used multiple times each day in the House, PQ votes are considered a last resort in the Senate. Even Republicans, who hold a 24-10 advantage in the chamber, are wary to deploy a PQ since it usually results in Democrats retaliating with procedural maneuvers designed to gum up the legislative process and derail the session.

It was last used in the Senate during a special session in September. Ashcroft believes the issue at hand with the provider taxes is worth the long-term aggravation for Senate leaders.

“I think that people in this state would be very happy if the Republican supermajorities that they’ve elected passed Republican, supermajority type items,” Ashcroft said.

The advice from Senate leaders to Ashcroft is to stick to the duties of his office.

“I appreciate the Secretary’s input, but the last time I checked, he doesn’t have a vote in the Missouri Senate,” Majority Leader Caleb Rowden, R-Columbia, wrote in a text message.

The use of the previous question builds resentment in the Senate minority, and can even split the majority. The end of this year’s session shows an ample supply of both is already present in the body.

“There was a lot of damage done in the last few days of the session that has to be undone before we can even begin talking about legislation,” Rizzo said. “There has to be a mutual respect and understanding of how we move forward.”

“Hopefully it is one of the last resorts we get to on an issue,” said Senate President Pro Tem Dave Schatz, R-Sullivan. “We are always trying to get to a point of resolution that is acceptable.”

The provider taxes, called reimbursement allowance, are paid by hospitals, pharmacies, nursing homes, and ambulances. The tax is a levy on the total revenue for each and is paid by reducing Medicaid payments by the amount due.

The funds are then accumulated and draw about $1.80 in federal support for every $1 from the funds. While it does not fund the full Medicaid program, it is a larger share of the total cost than general revenue from income and sales taxes.

First enacted in 1992, under Ashcroft’s father, then-Gov. John Ashcroft, the tax has been renewed 16 times. The sunset date is aligned with the end of a federal fiscal year, Sept. 30, because any federal changes in how the money is accounted for would likely take place as a new fiscal year begins.

The timing for a special session is uncertain, the legislative leaders said.

The minimum amount of time it takes to move a bill through the General Assembly is five days. A special session called by the governor has 60 days to complete its work.

Parson has not stated publicly whether he supports including either amendment or both, in an FRA renewal.

Wieland won Senate approval for his language in late March, and Onder brought up his plan to bar Planned Parenthood when the Senate returned to the bill in the session’s final weeks.

Ashcroft first weighed in on the debate over the provider taxes shortly after noon on Friday, when the final efforts to pass the bill in any form had already failed. In a news release, Ashcroft said he is “a champion for human life” and “encourages the Missouri legislature to adopt strict language – in legislation regarding the Federal Reimbursement Allowance (FRA) – to ensure FRA monies would not be used to fund the killing of innocent human life.”

Ashcroft’s first political race was a failed bid for a state Senate seat, and in the interview, he said he was voicing the same abortion stance he promoted in that campaign. He said he’s not trying to tell lawmakers what to include in the bill but that it should be as strong as possible.

“I don’t want to be in the middle of anybody’s bedroom,” Ashcroft said.  “All I want is to make sure that we’re protecting those human lives.”

The provider taxes became a target for the amendments because previous efforts to add language to budget bills barring Planned Parenthood from being a Medicaid provider were tossed out by the courts.

“All they’re doing is taking language that’s been approved in budgets for I don’t know how many years and putting it off directly on the FRA,” Ashcroft said. “So many of the same people that are complaining about it, voted for that same language in the budget last year.”

The Wieland and Onder amendments have no direct relation to abortions, Rizzo said. The GOP majority has already passed a bill that would ban abortions after six weeks, which is blocked from being enforced by the courts until a Supreme Court decision on a similar law from Mississippi.

“You can’t do much more than they have done on that issue,” Rizzo said. “Like on guns, they have cut to the bone when it goes to those issues. Now that those issues are so extreme now, they have to start creating new items and now they are going after birth control.”

Wieland’s provision targets FDA-approved contraceptive medications and devices designed to prevent fertilization. In the small number of cases where fertilization occurs, the targeted products also prevent implantation in the uterus.

Onder’s amendment would prevent Planned Parenthood, which provides abortions only at a St. Louis clinic, from providing any Medicaid-covered services at other clinics in St. Louis, Joplin, Springfield, Kansas City, and Columbia.

The agenda for a special session is set in the governor’s call and no legislation on other subjects can be considered. Parson may find a way to exclude consideration of either amendment or he may direct lawmakers to consider them.

Ashcroft said he thinks it would be difficult to exclude debate of how to spend money raised by taxes enacted in a special session. Rizzo said he would like Parson to find a way to make it just about extending the taxes.

“I don’t believe we should be taking a $2 billion gamble on making sure Republicans don’t give access to birth control,” Rizzo said.

He supports both amendments but doesn’t want to take “extreme measures” to enact them, Schatz said.

“I am going to explore those possibilities,” he said, “before we even consider going down that path.”