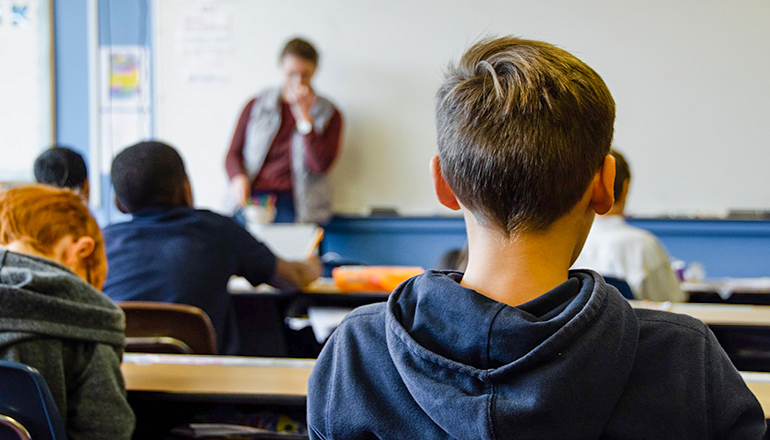 The struggle is real for Missouri when it comes to a constant shortage of K-12 public school teachers. The state Department of Elementary and Secondary Education (DESE) wants to ramp up its teacher workforce by seizing the opportunity in a relevant setting. Dr. Paul Katnik, the assistant commissioner of the Office of Educator Quality, says he knows where the state’s next generation of teachers will come from.

“They are sitting in our high schools today,” he tells Missourinet. “So, we should take advantage of the opportunity and recruit them in. We just feel like we have to be aggressive about recruiting.”

One reason for the aggressive approach is because the state is only keeping about one-third of its teachers as far as year six.

“That creates all these holes that have to be filled and we don’t have the supply coming that we need to have to fill that,” he says.

The department wants $200,000 in its next state budget to build some students into educators of tomorrow. The funding would award startup grants to about 20 school districts with high-minority, high-poverty populations and those in hard-to-staff content areas and geographical locations.

Districts can choose their own approach to the program called “Grow Your Own”, but they all have the same end game – to recruit within their own student population. The direction could be as simple as a club to one that offers full scholarships requiring those students to teach for a period of time in the district after they graduate from college.

“That’s one of our big, attempted selling points here is you’re not recruiting students to work in other school districts. You are actually building your own pipeline,” says Katnik. “So, there’s some National Education Association data that came out years back that said 60% of teachers teach within 20 miles of where they went to school. And that’s the whole notion is the high school students in your district now are likely to be your future teachers. So, let’s get very intentional about identifying them, supporting them, and building up your own pipeline.”

Katnik says about 115 districts, or 20% of the state’s K-12 public schools, already have a “Grow Your Own” program.

“That means 80% of our school districts don’t have a program,” he says. “We really need to flip those percentages – 80% with a program and 20% without or even less than that. And that’s what those startup grants would do is try to help school districts get moving on that. We’ve been giving startup grants for a couple of years now. So, we have some sense of what kind of money actually helps get a program up and running. We tend to shoot for about $10,000 grants.”

During the application process, DESE asks districts to explain how they will identify and recruit students. The department asks how they will help these students learn to be a good teacher. Districts are asked which teacher education programs they will partner with. And finally, those seeking to renew their grant must evaluate whether their program is working.

Katnik points to a few districts with great success recruiting students through this effort. He says Fort Zumwalt School District near St. Louis has a long history with the program. It offers full scholarships to a few students annually by asking their teachers to donate $1 out of each paycheck for the scholarship fund. The district also holds an annual golf tournament with all the proceeds going to the fund.

Columbia Public Schools partners with several teacher education programs and gets scholarships from some of them. It has a support group to help parents with college preparations for their children.

In southwest Missouri’s Cassville, more than 50% of its teachers grew up there.

“They’ve built on that to create a workforce that’s pretty much homegrown,” he says.

The state has about 70,000 teachers educating roughly 900,000 K-12 public school students. Katnik says some indicators about the teacher workforce are pointing in the wrong direction.

“We have declining enrollment in teacher education programs. That’s been happening for the last six years – down upwards of 20% of what we used to produce six years back. Of course, that leads then to a reduced number of people completing programs,” he says.

Other problems include a decline in the number of teaching certificates issued, an increase in retaining teachers, and premature retirements during the COVID-19 era.

“I’m not an economist but if your supply is down and your demand is up, it looks to me like a recipe for some trouble,” says Katnik.

Teachers in science, math, and special education have been in short supply for years. It is also tougher to recruit teachers to educate in deeply rural communities and the inner cities.

“Those are just not the first places people choose to go,” he says. “Years ago, I didn’t hear anything about people struggling to find elementary teachers but you do now, especially in those locations. We’ve just seen it kind of ramping up as the years have gone by. Your guess would be as good as mine about what you think the pandemic has done to that situation.”

Pay is another problem. Missouri’s average teacher salary is about $42,000 – ranking it about 42nd in the nation.

Katnik says the state’s starting teacher salary, which has not been changed in 15 years, ranks about 49th. Teachers with a full degree and who are fully certified are starting out making $25,000 a year.

“The day has to come when we decide we are going to have to change that,” he says. “This whole idea of building the “Grow Your Own” program and trying to raise salaries and all those things that are working against us, we have to take it on at some point. I know the timing isn’t good, but I also think the consequences of not are pretty extreme. I’m not an alarmist by nature. I really don’t ring bells unless I think we better pay attention. But I wonder if maybe we are there.”

Katnik says he has an uphill battle because of the tough financial times the state is going through.

“We’re getting a taste of what happens to school districts when they just don’t have the people and we’ve seen examples of school districts starting two weeks late or closing for a week or whatever because they just don’t have the adults,” he says. “I hate to say there is a plus side to the pandemic in a single way but if it helps give us a little sense of what it means if we neglect this area of recruitment, maybe it’s a good thing. We just need to get serious about it. You can’t, in my opinion, hope to compete when the border states around you have all been working on their minimum salaries in the last year or two and are beating you out by $7,000.”

DESE has submitted its fiscal year 2022 budget proposal to the Governor’s Office. Gov. Mike Parson could release his proposed fiscal outline in January.

Photo by Taylor Wilcox on Unsplash