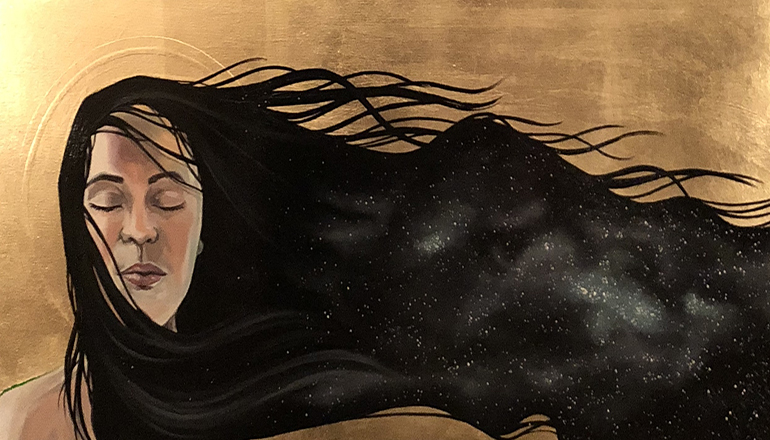 A collection of works by a Trenton resident will continue the 2019-2020 exhibition schedule in the Dorris Rider Art Gallery at North Central Missouri College in Trenton.  “A Retrospective…So Far!” by Jim Norris is now open and will be on display through December 13.

This collection contains work from two solo exhibitions – Cautionary Tales (2016) and Raised on Promises (2018) – as well as paintings from several group shows from the past couple of years.  Two brand new paintings are also included.

“As the director of the gallery, I was slightly hesitant to display my work here because I think it’s important to bring in perspectives from outside our community,” Norris said.  “However, as a painter, I ultimately wanted to share my art with my local friends and family.”

The paintings are labeled as mixed media artworks, utilizing a wide variety of materials such as oil paint, spray paint, and enamel.  Norris’s art has been described as easily recognizable because of the regular presence of imagery such as blackbirds, blindfolds, and shiny gold leaf.  He also regularly incorporates the human form.

“Obviously, one of the best ways to tell a story is to include people in an image,” said Gallery Director Jim Norris.  “As human beings, we simply relate best to images of other humans. With that said, most of the time I include a crow or a raven in a painting, they are usually there to symbolize some sort of human feeling, emotion, or thought.”

While Norris refers to his art as a form of storytelling, the true meaning of each artwork is usually left unspoken.

“The themes of my paintings are intentionally vague,” said Norris.  “I almost always have a specific inspiration for each artwork – either from my own life or something I have observed in society – but I prefer to let the viewer come to their own conclusions.  Ultimately, my intention for these paintings is to hopefully inspire an internal dialog for anyone who sees them.”

Norris has been the art instructor at NCMC since 2001 and the director of the Rider Gallery since its inception in 2002.  He has shown his art in many galleries throughout the Midwest.  He is represented by the Hilliard Gallery in Kansas City, MO.

For more information, please contact Jim Norris at 357-6345, or by email at [email protected].

Regular hours at the Rider Art Gallery are 8:30 am to 4:30 pm Monday through Friday, as well as selected weekend and evening hours by appointment.