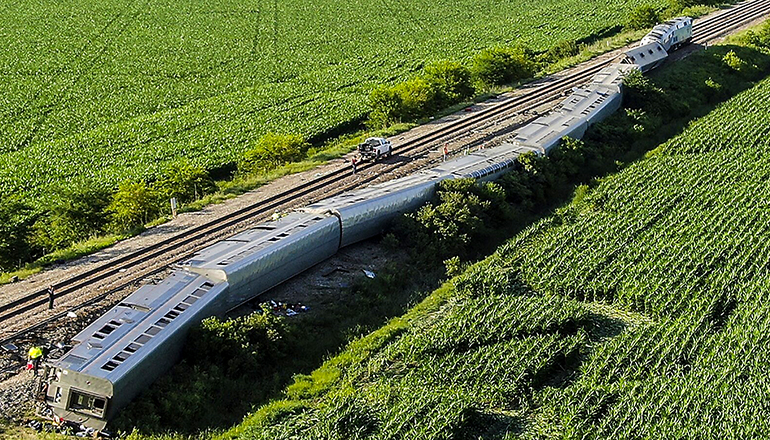 KANSAS CITY, Mo. (AP) — The first lawsuits have been filed only days after an Amtrak train collision and derailment in rural Missouri that left four people dead and injured up to 150 others.

Amtrak and BNSF Railway Co. filed a federal lawsuit Thursday against the concrete contracting company that owns the dump truck hit Monday by the passenger train, the Kansas City Star reported. That lawsuit blames MS Contracting, of Brookfield, Missouri, for the crash, saying the train was “clearly visible” and that the truck driver was careless in crossing the tracks.

The crossing where the collision occurred has no lights, signals, or gates to warn of an approaching train. Before the crash, area residents had expressed concerns about the safety of the crossing, described by locals and a federal transportation safety official as very steep. Chariton County leaders have been pushing for a safety upgrade at the railroad crossing for nearly three years, presiding county commissioner Evan Emmerich said this week.

The truck driver, Billy Barton II, 54, of Brookfield, died in the collision, along with three passengers on the train. His widow, Erin Barton, also sued Thursday, filing a wrongful-death lawsuit in state court against Chariton County and a BNSF official that cited the crossing as unsafe.

Two train passengers — Rochelle Cook, 58, and Kim Holsapple, 56, both of DeSoto, Kansas, died at the scene. A third passenger, 82-year-old Binh Phan, of Kansas City, Missouri, died Tuesday at a hospital. The Missouri State Highway Patrol said up to 150 people also were injured.

The Southwest Chief was traveling from Los Angeles to Chicago when it hit the truck near Mendon. Two locomotives and eight cars derailed. Amtrak officials said about 275 passengers and 12 crew members were aboard. The National Transportation Safety Board said Wednesday that the train was going about 87 mph (140 kph), under the 90 mph (145 kph) speed limit, when the collision happened.