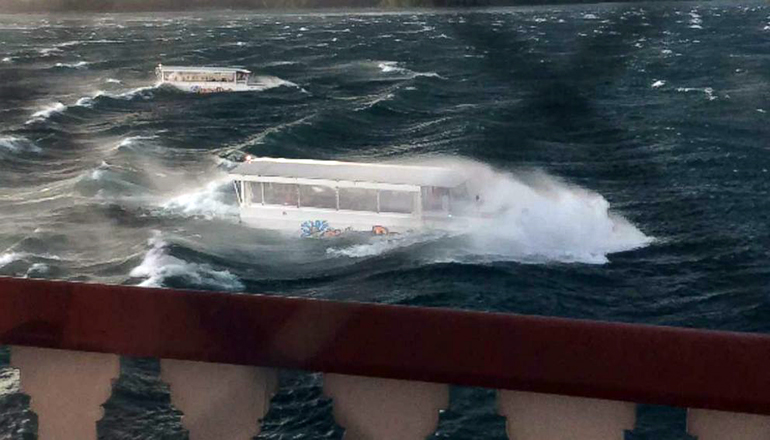 The death toll has climbed to 17 from a Ride the Ducks boat flipping last night during a storm on Table Rock Lake in Branson. Governor Mike Parson spoke at a press conference at the lake this morning interrupting when questions to the Stone County sheriff focused on speculation.

Investigators think high winds from storms there led to the boat flipping on Table Rock Lake. Governor Parson has promised a full investigation from the National Transportation Safety Board and the Coast Guard.

Footage shows the doomed boat’s nose apparently submerged before the video ends. The boat sank, wheels down, 40 feet down, and then rolled to an area 80 feet deep, Rader said. By late Friday morning, all 17 bodies had been recovered, US Coast Guard Lt. Cmdr. Tasha Sadowicz said.
Among those killed was the driver, Robert “Bob” Williams, said his widow, Judy Williams.
A second crew member — the boat’s captain, whose name wasn’t immediately released — was among the survivors and was taken to a hospital, said Pattison, president of Ripley Entertainment Inc.
Rader, the sheriff, said life jackets were on the boat, but he doesn’t know whether people were wearing them.
The Coast Guard will conduct an investigation, said Sgt. Jason Pace of the Missouri State Highway Patrol, which is assisting. A team from the National Transportation Safety Board was to travel to the scene Friday.
Duck boats are amphibious vessels that travel on both land and water and are popular among tourists in major cities. The boats’ history dates back to World War II when such vessels were a common sight due to their versatility.
Post Views: 2,478