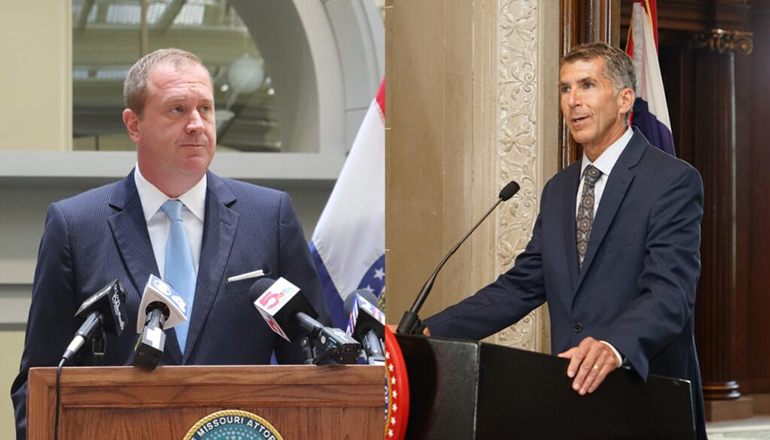 (Missouri Independent) – Attorney General Eric Schmitt will not appeal a consequential court ruling that strips powers from local health departments, despite a request from Missouri’s state health director to do so.

In an email to The Independent, Schmitt’s spokesman said the attorney general’s office notified the Department of Health and Senior Services of its decision.

“We have informed DHSS that we will not appeal or take any further action in this case and that they should begin enforcement efforts immediately,” said Chris Nuelle, spokesman for the attorney general’s office.

Lisa Cox, a spokeswoman for DHSS, confirmed the attorney general’s decision Thursday, adding that “there are no plans to use internal or outside counsel” in order to pursue an appeal.

In a Nov. 23 call with local public health departments across the state, Adam Crumbliss, the director of DHSS’ division of community and public health, said DHSS Director Donald Kauerauf had requested the ruling be appealed. Cox said Thursday that the department’s general counsel made the request to the attorney general’s office on Kauerauf’s behalf.

“One other piece of news that I will share, is that the director did let me know just now that he has made a formal request to the state attorneys general to appeal the ruling in the litigation that Judge Green ruled on today,” Crumbliss said on the call, a recording of which was obtained by The Independent. “And so I do anticipate we will see further activity on that front.”

However, a week later, Kauerauf indicated Schmitt’s office still had not told the state health department whether it intended to appeal.

“Although media reports indicate that the Attorney General’s Office will not seek an appeal, in this case, we are still waiting for confirmation of that fact directly,” Kauerauf wrote in a Tuesday letter to public health department administrators, which was obtained by The Independent.

During the pandemic, Schmitt, who is running for U.S. Senate, has sued cities, counties, and school districts over COVID mitigation measures they enacted, such as mask mandates.

Former Missouri Supreme Court Judge Michael Wolff said Thursday that Schmitt’s conflict of interest in the case — pointing to his other lawsuits against mask mandates in schools — calls into question whether or not he should have been the attorney to defend DHSS in the first place.

“Lawsuits are legitimate because they have adversaries,” he said. “It appears that there’s no adversary here because the attorney general agrees with the decision.”

“The idea that the attorney general can just go in personally, and because of his own personal feelings, stop appeals and dictate policy — if you allow that to happen, you basically have an attorney general running the entire state,” Hatfield said. “And that’s never how it’s worked before, and it’s not how it should work.”

Previous administrations have wrestled with the same issue, Hatfield said, and typically the attorney general’s office will allow state agencies or officials to hire outside counsel to represent them instead.

It’s something Schmitt’s office has done before. In an ongoing lawsuit between state Treasurer Scott Fitzpatrick and Secretary of State Jay Ashcroft, Schmitt backed out of the case, citing an undisclosed conflict of interest.

Instead, both sides of that lawsuit are being represented by private attorneys at a cost to taxpayers of more than $800 an hour. Hatfield is representing Fitzpatrick’s office in that lawsuit.

Neither Nuelle nor Cox clarified on Thursday whether DHSS has been given permission to use counsel outside the attorney general’s office.

Nuelle said that by law decisions about litigation strategy are exclusively within the attorney general office’s authority and, “DHSS cannot proceed with an appeal without our approval.”

Hatfield said in this instance, perhaps a third party could also attempt to intervene in the lawsuit and file an appeal.

The ruling issued by Green late last month has already caused a wave of uncertainty as to the state health department and local officials parse through what it means.

St. Louis County Executive Sam Page insisted Monday that the county’s mask order remains in effect, even as he said he would ask council members to approve a new one and written notices of the mandate were removed from the county’s website, the St. Louis Post-Dispatch reported.

On the Nov. 23 call, one local health administrator asked Crumbliss if the ruling applied to the local authorities’ response to COVID-19 or for all communicable diseases.

“I think it’s exactly the right question,” Crumbliss said. “Based on the ruling that Judge Green has issued, is that limited specifically to COVID, or is that the broader powers of public health? And all I can tell you right now is I don’t know the answer to that question.”

In Kauerauf’s letter on Nov. 30, he stated that DHSS is still reviewing and assessing the impact that the ruling has on “future public health activities as well as its relationship with LPHAs” and recommended that health departments consult with legal counsel on what it may mean for them.

On the call, Kathryn Magers, administrator for Schuyler County Health Department in northeast Missouri, expressed concern about the ruling. She didn’t understand what part of the state statutes were unconstitutional, and what the ruling meant for how they’ll be able to combat and prevent other communicable diseases in the future.

The ruling is not final until 30 days after it is issued, which would be Dec. 22, Kauerauf wrote in his letter. From there, DHSS would also have another 10 days to appeal.

“If no one does, the director’s position will not be preserved,” Hatfield said.

In his ruling, Green wrote that the regulations he deemed unconstitutional “create a system of statewide health governance that enables unelected officials to become accountable to no one,” and said that DHSS unconstitutionally granted too much power to individual local health officials and directors.

“A health agency director with the authority to shut down a school or assembly wields incredible power to coerce his subjects into submission,” Green wrote in his ruling.

In Missouri, local health departments for decades have been permitted to quarantine people in order to prevent the spread of a contagious disease and protect public health, or close schools in order to do so.

It’s unclear how much of that authority health officials retain after Green’s ruling, as Kauerauf noted in his letter that the ruling didn’t address existing regulations to require isolation of patients or quarantine of contacts.

“It’s a big deal,” Hatfield said of Green’s ruling. “It takes away a lot of authority that I think has been taken for granted in non-COVID situations.”